At Soma, ear candy is served 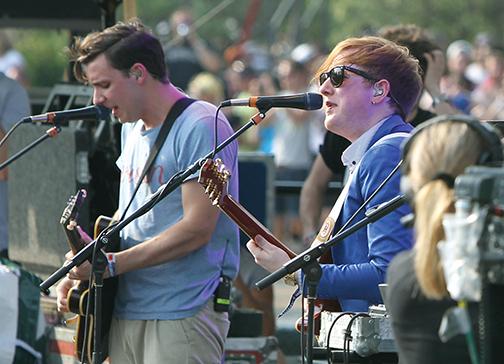 It’s said to be an old movie theater, which might explain the great acoustics and eerie atmosphere. But what goes on behind the scenes at Soma San Diego is more of a euphonious experience. The venue located on Sports Arena Boulevard is open to all ages. It has hosted its fair share of big-name artists as well as local and developing artists of all different music genres. In fact, it seems as if almost all developing bands or artists have come through Soma’s doors at least once in their careers. Bands such as Vampire Weekend, Slightly Stoopid, Streetlight Manifesto, Two Door Cinema Club, and The xx have all performed on Soma’s stage at least once on their musical journeys.

Soma isn’t just a concert venue; to some it’s a refuge where music becomes a medium of expression. Over the past couple of years, Soma has been home to many different music scenes featuring both big-name artists. It becomes an outlet to experience the possibilities of the music world, which many developing artists would not have otherwise. The theater can be an intimate setting, which allows artists to share their music with other open-minded people.

Upcoming shows worth seeing are these next months’ appearances of Augustana, who will soon release their new album “Life Imitating Life,” the post-hardcode fan favorite Chiodos, and Man Overboard, which is still gaining popularity after its big boom last year. Overall, Soma has earned its reputation to provide San Diego with talented new and upcoming artists.