Student cooks up passion for leadership 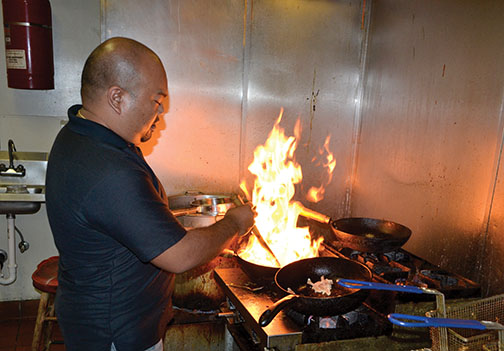 He built it, and they came. A year ago, a San Diego State student discovered the ruins of a restaurant in east Oceanside. Biology and journalism senior Nat Thitathan’s financial foes were snapping at his heels: debt, the cost of living and the threat of grad school expenses. He decided he wanted to break even. He decided to entrepreneur his own restaurant. Only after a year, he’s built far more than a Thai diner.

Thitathan owns and cooks for Papaya Bay, an Oceanside Thai bistro, which opened nearly a year ago. Simultaneously, he is taking 22 units this semester. Thitathan employs family and friends who need help, financially or otherwise.
“I think helping others is the ultimate education,” Thitathan said. “And, to do that, I had to take the ultimate risk.”
Growing up in the ghettos of Linda Vista and Spring Valley, Thitathan learned the essentiality of community. His parents acted as missionaries for the Church of Christ, and contributed intensely to the Thai community. His mother taught with the San Diego Unified School District and his father worked as both a minister and a psychologist.

“Thai culture is collectivistic. Here, it’s all about the individual,” Thitathan said.

The church, however, was not the only community that influenced Thitathan. The majority of his friends joined gangs. Some used crystal meth or cocaine. Some died. After his parents’ divorce, Thitathan resolved to escape his negative influences, fleeing 7,000 miles across the Pacific Ocean.

In Thailand, his parents’ country of origin, Thitathan overcame his financial disabilities, even landing a job as a disc jockey for Thailand’s 102 FM Pop Radio.

Thitathan returned to America and unearthed the passion rooted in him as a boy—medicine. After a few difficult years, his sister passed at University of California, San Diego’s medical institute. Thitathan aspires to enter a medical graduate program at UCSD, because of both the school’s prestige and the lives that still need saving today.

Graduate school is tangible for Thitathan, thanks to Papaya Bay.

“Nat is one of the greatest leaders and managers I’ve ever met,” Papaya Bay waiter and assistant cook Junior Barroso said.

Barroso has known Thitathan for over 10 years, a relationship foreign to most restaurants, but characteristic of Papaya Bay. Thitathan focuses on disadvantaged youths with stories similar to his, who don’t have access to the skillset necessary for success.

“I had to teach them table manners, patience—even algebra,” Thitathan said.

Thitathan provides his employees shelter out of his own home, jobs at Papaya Bay and even a future. He utilizes restaurant runoff to finance employees’ college tuitions. Despite the difficulties of his role as mentor, Thitathan finds community an apt reward.

“The way I see it, it takes six to carry a coffin,” Thitathan said. “Do you know six people who will really be there for you?”

Papaya Bay broke even nearly a month ago, and with a couple of years left in his undergraduate, Thitathan is looking ahead to his educational future. But regardless of the school he ends up attending, Papaya Bay will continue to be a source of income and fraternity for him and his employees.

Thitathan defeated poverty, built a restaurant and is marching toward graduate school. Although his proverbial plate is fuller than any Thai dish, Thitathan is content.

With only raw determination, this native of the ghettos constructed a community that will outlast any student loan.