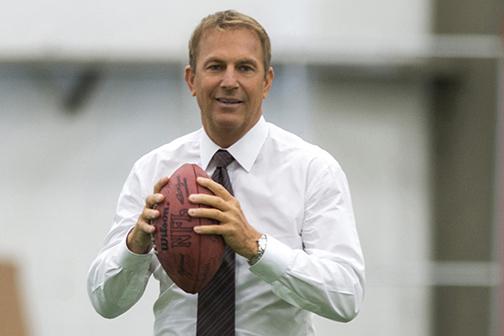 Football fans far and wide, this is the movie for you. Directed by Ivan Reitman, “Draft Day” stars Kevin Costner as General Manager of the Cleveland Browns Sonny Weaver Jr. The drama takes place on NFL draft day, the one day a year that hundreds of young athletes across America achieve their dream, of becoming a player in the National Football League. Weaver has been given the opportunity to have the No. 1 draft pick, but many conflicts ensue. As the day unfolds, the audience gets a look at what really happens behind the cameras and the bright lights of the stage.

“Draft Day” is filled to the brim with juicy tension that’s sure to get any football fan antsy. There’s even a little romance on the side for those not-so-obsessive football fans. There are no dull moments in this flick.

Yet, there are parts that could have been edited, that weren’t crucial to the plot and gave some confusion to the film, such as the in-depth details of a subplot with Weaver and his love interest, Ali, played by Jennifer Garner.

“Draft Day surpasses Costner’s last film, “3 Days to Kill,” which was a dud in the box office. With the actual draft day soon upon us, it’s sure to be a hit with fans who are itching for the season to begin.

Is it a drastic, need-to-see-in-theaters type of movie? Not really. If you’re a fan of Costner, it’s definitely one of his better movies since his supporting role in “Man of Steel.” But if you aren’t wild about football or Costner, wait to rent it.

Also read: Oh, Spirit rocked during their show at the Soda Bar