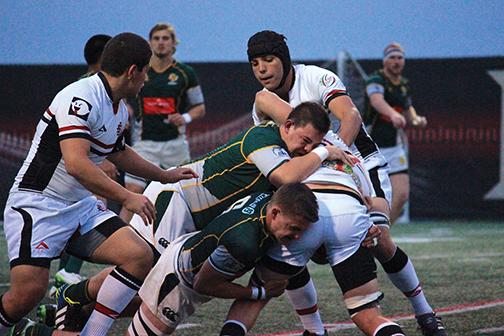 The bleachers disappeared as over 200 people crowded around playing field PG 610 to watch No. 11 San Diego State Rugby Club Team close its season against No. 7 Cal Poly San Luis Obispo on Saturday night.

SDSU students, parents and friends lined the fence surrounding the field. Some held signs saying things such as, “Mantooth the Magnificent.” The players stepped onto the field in a winter environment, with grey skies and an all-too-cold breeze.

And then, with the blow of the referee’s whistle, it was time for some rugby.

The Aztecs outplayed the Mustangs for the first five minutes of the game, owning the possession battle by a large margin. From that point on, though, the Aztecs had a difficult time advancing past midfield against the stalwart Mustang defense.

Cal Poly finally scored the first try of the match with 20 minutes left in the first half and led 7-0. The Mustangs gained momentum by breaking the scoreless tie and outmatched SDSU for the rest of the first half, scoring two more tries. The Mustangs led 19-0 at halftime.

The second half opened just as poorly as the first half ended for the Aztecs, as the Mustangs quickly scored a try to push the score to 26-0.

Both teams traded blows back and forth for the rest of the half until Cal Poly scored another try with 6:22 to go. Despite several close attempts, SDSU couldn’t respond with a try of its own and Cal Poly won the game 31-10.

SDSU first-year head coach Alex Lichtig was proud of the way his team fought against the Mustangs.

“It was a tough game,” he said. “Unfortunately we just came out on the losing end.”

SDSU freshman scrumhalf Austin “Draper” Switzer was also extremely proud of his team, despite the loss.

“We came out with a great effort,” he said. “We have a strong score of guys that is never willing to give up.”

The Aztecs now wait to see where they rank in the Canterbury Division 1A College Rugby Top 20 to see if they will make the playoffs.

If you want a pure exposition of raw talent, strength and skill, look no further than SDSU rugby. I had such a thrill attending this game. If readers have one takeaway from this story, let it be this: if you don’t know about SDSU rugby, change that. Go watch them. These guys are a blast to watch, and I can’t wait for next season.