‘Generation whatever’ needs to take charge 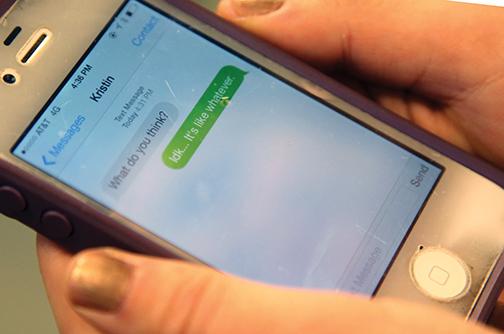 “No offense, but, like … (insert offensive remark here). Yeah, whatever.”

Somehow, our generation has managed to find a way to explicitly voice our potentially inflammatory thoughts and remove ourselves from responsibility. We will regularly state “no offense,” yet we do the complete opposite.

This is how we speak. We have forged an indifferent language which can only be categorized as unique to our generation: the millennial generation, the Digital Natives, Generation Y and most appropriately, Generation “Whatever.”

I dub us Generation “Whatever” because our speech habits reflect the hopelessly indifferent, apathetic and cynical nature of our generation. Our words reflect upon the culture we operate, which prefers indifference and vagueness to knowledge and strong opinions. A culture of “whatever,” and “no offense, but” show us the context of our culture through our words. However, it’s not what we say with these words but how we say it.

[quote]The facts all point toward this indifference. Politically, our generation couldn’t care less.[/quote]

During the 2012 U.S. election, polls showed that only 45 percent of citizens aged 18-29 voted, in comparison with the 72 percent of those aged older than 65. Polls also revealed millennial voter participation decreased by six percentage points since 2008.

This sentiment doesn’t change when it involves our schools politics, either. This year’s A.S. elections showed a dismal 9.9 percent student body participation, which was eight percent lower than last year’s.

The lack in participation perhaps stems from our generations’ apathy in regards to political leadership. A Harvard politics poll found that nearly 59 percent of people younger than 30 believed elected officials are motivated by selfish reasons.

Our culture of indifference and vagueness is also reflected in millennial sexuality as well.

The term “friends with benefits” is one that is not uncommon among college students. The term implies a sexual relationship with someone without the commitment expected from a monogamous relationship. Casual sex is common within our age bracket.

In one of the largest studies conducted on college student sexuality, researchers found, among 1,500 Duke undergrads, that 73 percent of students were “hooking up” with others on a regular basis. However, many preferred not to have a label to define their hook-up exclusive relationship. “Boyfriend” or “girlfriend” holds too much meaning and commitment in a culture that is hopelessly non-committal and vague.

Our indifference and distance from commitment is understandable. We have grown up in a world has been anything but static. Growing up in a whirlwind of the post-9/11 war on terror and the dot-com-boom has left us with a level of cynicism and apathy reflected in our speech. It’s become cool to seem unphased by large political events. It’s become cool to not care.

This is where we run into an issue.

This language, in which our generation is fluent, whimpers with indifference and lacks in conviction. By punctuating our sentences with words such as “like” and “whatever,” we lose conviction and articulation behind what we say. With it, we lose all credibility as speakers and as people. We need to stop speaking as if we don’t care if we ever intend to show that we do.

If we are unable to articulate ourselves and speak only in our generation-specific language of “likes” and “whatevers,” we will always be faced with scrutiny from past generations. We will never overcome the negative stereotypes of millennials, characterizing us all as lazy and privileged.

In reality, we do care about our society. At least, some of us do. Our generation is responsible for many of the fastest growing social justice movements on social media, such as OccupyWallStreet and even the Egyptian revolution of 2011. While we may not participate in democracy through voting, with a click or share we become the inventors of social movements online and eventually the real world.

But, it’s not enough for us to simply question authority; we have to speak with it, too. To make a strong impact we need to start with strong words.