‘Big Queer BBQ’ reflects all shades of the rainbow 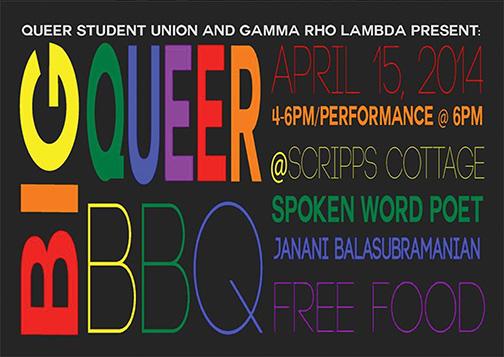 In the 19th century, the word originally meant strange. In the 20th century, queer became a derogatory term defining homosexuals and any others who acted outside traditional gender roles. But today, queer is being reclaimed by the community the word was originally used to demean.

Last week, San Diego State’s Queer Student Union held its first annual Big Queer BBQ, an event previously known as the Big Gay BBQ. Both are essentially the same event, just with a different label. This transformation in name begs the question: What significance does the term queer hold in the lesbian, gay, bisexual and transgender community today?

[quote]The transition from Big Gay BBQ to Big Queer BBQ signifies the relevance of the word queer as an inclusive term used to include and define those who don’t identify with any singular sexuality or gender identity. It isn’t compartmentalized by traditional labels.[/quote]

Truth be told, while some choose to identify as strictly straight or homosexual, there are people whose sexual identities are as fluid as their wardrobe choices. A study conducted in 2000 on 80 women who identified as lesbian, bisexual or unlabeled, found that one-third changed their labels once and half of them changed their sexual identities more than once.

While society is quick to label this fluid sexuality as bisexuality, this label isn’t necessarily accurate.

In a patriarchal society dominated by traditional gender roles and sexualities, it becomes easy, even for the LGBT community, to compartmentalize different people into different labels. Surprisingly, not everyone likes this. Those who don’t fit into any particular labels excluded or assume a sexual identity, which they don’t feel accurately reflects who they are.

Throughout the past few years, several celebrities have even come forward to express the fluidity of their sexuality, including British diver Tom Daley, Hunger Games star Josh Hutcherson and Divergent’s actress Shailene Woodley. All of these people either explained that they have had attraction to both sexes in the past, or that they won’t rule it out in the future.

However, when we see this in the news we only see headlines that scream, “Gay!”, “Bi!” or “Lesbian!”

[quote]However, queer is not just a word to define one’s sexuality, but also an umbrella term used to be inclusive. This is true of the Big Queer BBQ.[/quote]

It was this spirit of inclusivity that lead to the decision of changing the name of the event, Negron said.

“It was decided that changing the BBQ to the Big Queer BBQ would allow for more inclusivity within the community by addressing all kinds of sexualities and gender identities,” he said.

The introduction of the Big Queer BBQ is tremendously important for the LGBT community because by using the word queer, they are allowing those who don’t fit in the black and white binary system of sexuality to be included. It’s not up to these labels or others to decide one’s identity, but one’s sexual and personal identity is entirely subjective and up to them.

This label-obsessive culture we live in, within the LGBT community and out, is an issue because it’s a damaging culture, sending many sexually confused young people into anxiety because their feelings don’t fit within a category. It’s hard to come out of the closet when you don’t know what to come out as.

For those living in the LGBT community and being pressured to secure a label for themselves, the word queer is liberation. It further proves that being queer is a legitimate identity. Whether you are gay, straight, bisexual, transgender, asexual, pansexual, or any other shade of the rainbow, queer allows for a place to belong.

[quote]Sometimes, for those of us who have lived in the rainbow for so long, we forget that labels sometimes constrict us.[/quote]

It’s time for us to remember, through the Big Queer BBQ, that even colors of the rainbow have different shades.