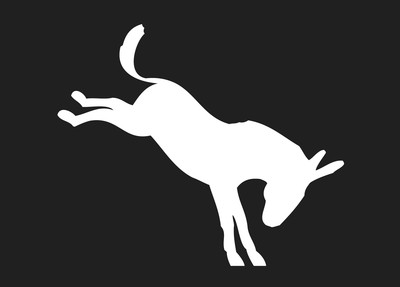 As you scour through the internet for new dance music, you are bound to stumble upon an iconic  silhouette of a donkey kicking out its hind legs. That silhouette is the proud logo of the exciting electronic music label Donky Pitch, whose graphic laid over various backdrops has become a reliable brand for the genre.

My first introduction to Donky Pitch came from producer Lockah and his then-upcoming 2013 EP, “Only Built 4 Neon Nites.” Lockah’s glowing synthesizer music in the EP is designed to play best while driving down the highway at night. “Young Neon Countach” from the record takes from the neon bass of LuckyMe contemporaries like Rustie and Obey City, while keep its foot on a steady motorik thump like a hyper-modern Kavinsky.

Lockah released his debut album, “Yahoo or the Highway,” from Donky Pitch this week, and it’s a fresh development from the producer. The improved, more hi-def songs in the debut work with more edge and purpose than background automobile music. Lead single “If Loving U Is Wrong, I Don’t Want to Be Wrong” feature an epic synth line built for the blaze of glory, while standout “Ayyo Tricknology” has Lockah kicking a good bass banger for the dance floor.

Another rising Donky Pitch artist is the producer The Range, who released his debut album, “Nonfiction,” late last year. The Range nails a sublime electronic middle between the chaotic and blissful. I’ve read some critics compare his sound to Aphex Twin in his record “Richard D. James Album.” Though The Range lacks the twisted madness of Aphex in that specific album, the clash of jittery breakbeats and fluffy piano chords from The Range certainly float in a similar realm as Aphex’s pitch-perfect track “Flim.”

The Range also recently put out a new record, the “Panasonic” EP. The new record finds The Range treating the EP format as a testing ground for new ideas he wants to try out. “Panasonic” plays rather scattered in sound and style, but it’s a fun, active EP. A couple of my favorites are “Washingtons,” an AZ-sampling wonderworld of a house track, and “Tricky Pose,” The Range’s colorful attempt at modern jungle.

Donky Pitch is hard to miss in current dance music, and with such exciting releases, its main artists are also difficult to pass on. When you see the logo, you know you’re in for a treat.