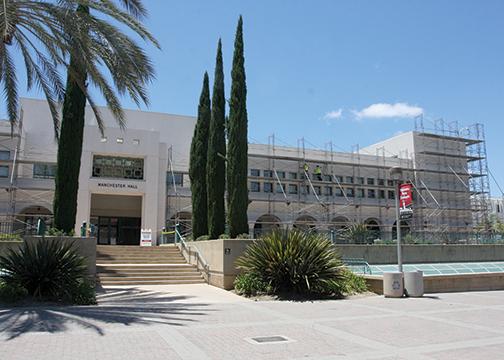 San Diego State is currently in the midst of several construction projects, including major renovations to older buildings on campus, upgrades to the underground heating system and the addition of new facilities.

“It’s a pretty complicated process,” Director of Construction Management Mike Woomer said of selecting which renovations were most needed. The process includes evaluating the existing conditions of the building based on when they were built, the accessibility, seismic movement and whether the existing buildings meet the needs of students, faculty and staff.

Zura Residence Hall
Construction is well underway on Zura Residence Hall, with the project set to be completed by July 2015. Renovations to Zura began in May of this year, marking the first full renovation of a residence hall in SDSU’s history.

Woomer said Zura Residence Hall was most in need of the renovation.

“Other (residence halls) were in a little bit better condition,” Woomer said.  “Zura had deteriorated the most. It needed a face lift.”

Infrastructure, lounge and meeting spaces, and increased sustainability practices such as an LEED Silver Certification are just some of the improvements that are being made to the residence hall.

Manchester Hall
Manchester Hall is undergoing a series of exterior renovations, which are expected to be completed in late September. The building will be patched and painted, and undergo repairs to the exterior window sills and the metal roof flashing. Scaffolding is erected on the north, east and south sides of the building, and students are asked to avoid walking underneath the scuffling and use the main doors of the building.

Steam Utilities Infrastructure
The decades-old steam piping system that is responsible for heating campus is being replaced in certain areas. The project began in 2013 and is currently in the third and final phase for replacing the failing parts of the system. Work will take place within the roadway from Facilities Services and Engineering buildings to the Geology, Mathematics and Computer Science building. The project is anticipated to run through January 2015.

South Campus Plaza
SDSU is beginning construction of a hybrid student living and retail space directly across from the trolley station. Once completed, South Campus Plaza will house approximately 600 students and be host a number of retail and dining locations. Designed to serve both the campus and surrounding neighborhoods, South Campus Plaza is currently in the preliminary stages of construction, with major project work planned for September. Phase one of two involves building an above-ground parking structure and two residential buildings. The project is estimated to be completed by Fall 2016.

Woomer said SDSU has a long planning horizon for future construction. He added that the university has conducted feasibility studies for a number of buildings on campus.