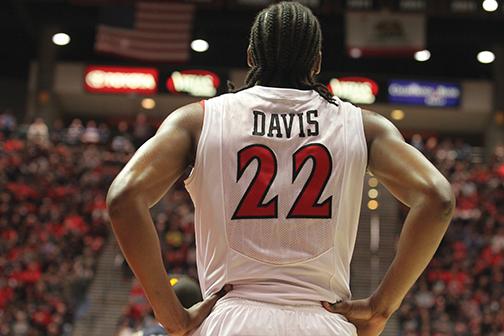 When we all graduate, we’ll spend our allotted time on Cloud Nine. Cap-and-gown selfies, parties, family get-togethers, and an obligatory cry-session with Vitamin C’s “Graduation (Friends Forever)” playing in the background.

Then, it’s time for life to begin. Time to get employed. Hopefully, you’ll have connections from your years at San Diego State that’ll pay off during your job hunt. But no matter how many people are in your corner, you’re still starting an arduous process that’ll make finals seem like butterflies, rainbows and all that jazz.

It’s the same for SDSU’s two men’s basketball stars looking to earn their keep in professional basketball. The Brooklyn Nets bought the rights to Xavier Thames from the Toronto Raptors after the Canadians picked him 59th overall in the 2014 NBA Draft. And Josh Davis signed with the summer league team of his hometown Charlotte Hornets as an undrafted free agent.

Their “job hunt” began in the 2014 NBA Summer League, where NBA teams draft picks and young prospects fight for a spot on an NBA roster.

Thames averaged 20.4 minutes per game (Summer League games are 40 minutes) throughout the Nets’ five games in the Orlando Summer League, and he started two.

But surprisingly enough Thames defended very well, using his length, quick hands and defensive instincts to nab 2 steals per game, good for third in the Orlando Summer League. He also dished the ball out frequently, averaging 2.4 assists per game.

Thames’ play also led to more Brooklyn points than the box score indicates. He scored zero points against the Miami Heat, but his six assists, one steal and one offensive rebound led to 17 Brooklyn points. Similar story against the Philadelphia 76ers, when Thames’ four steals and two assists gave the Nets 13 points in addition to the two points he scored.

When you outperform your team’s prized draft selection, you know you’re doing something right.

And another surprising moment: Davis had three double-doubles over seven games, grabbing 16 rebounds twice and scoring 18 points along with 14 rebounds in his final NBA Summer League game. He also started three of Charlotte’s seven games in the Las Vegas Summer League.