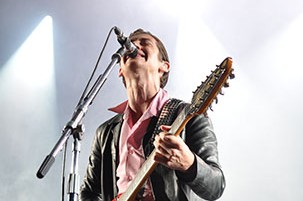 Arctic Monkeys stand at the forefront of rock ‘n’ roll with their commanding stage presence and radio domination. With hit after hit climbing the charts, the group has come a long way from their humble Sheffield origins. And boy, do these guys know how to put on a show.

On the final leg of the North American “AM” tour, San Diego State was proud to host their sold out show at our very own Cal Coast Open Air Theatre. You could feel the anticipation around the campus with lines of fans starting to build up from Campanile walkway to the new Conrad Prebys Student Union hours well before the show. Fans covered in Arctic Monkeys merchandise, from band T-shirts to custom signs and posters, sprawled the venue.

With a quick and energetic set from opening band Barbarian, time had come for Arctic Monkeys to take the stage. A hush fell over the crowd as the lights dimmed, and one by one, the band members embraced the crowd. A wave of screaming fans grew even louder as the heavy riffs of “Do I Wanna Know” took over everyone in the audience.

The energy was palpable as frontman Alex Turner masterfully transitioned into the sultry and groovy “Snap Out of It.” Then he took the intimacy to another level with the mysterious rock serenade, “Arabella.” Turner has a way of working the crowd, calling out to them and bringing back their energy tenfold. From his gyrating hips to passionate solos, the lead singer’s persona is a dangerously intoxicating mix of Elvis-level swagger meets good ol’ English punk rock.

From there, Arctic Monkeys pulled hit after hit from their long-standing catalog. Classics such as the unbelievably energetic “Brianstorm” followed their more theatrical hits “Don’t Sit Down ‘Cause I’ve Moved Your Chair.” Those songs managed to pull the crowd’s heartstrings, even within their dark and brooding sound, and reminded everyone that they have captured our hearts for more than half a decade. After sprinkling in “Knee Socks” off their latest album, the band continued to deliver the throwbacks with rowdy rock favorite “Library Pictures” and the spry poppy likes of “Teddy Picker.”

Moving back to finish out their latest album, “Fireside” set the mood with its warm, rhythmic line, matched with an orange tinge that swallowed up the stage. The scene changed as lights began to reflect off disco balls on stage. You could have sworn you were back at your senior-year prom as the atmosphere winded down during the slow-dance hit “No.1 Party Anthem.”

Rounding out the set with their latest hit “Why’d You Only Call Me When Your High” and classic single “Fluorescent Adolescent,” it was fascinating to see how much they have grown. From their early lively punk roots to their more serious tone and heavier rock sound, it was the same Arctic Monkeys we have all come to love.

No Arctic Monkeys set would be complete without the legendary “505,” an intimate anthem of love lost and love found. Matched with a stinging guitar solo that pierces right through you, the song’s final vigorous chorus was met with cheers as legions of fans belted their heart out to the band.

Begging and screaming for one more song, the crowd’s prayers were answered as the band took the stage one more time to deliver an animated encore of “One for the Road,” “I Wanna Be Yours” and the immaculate “R U Mine.” With heavy riffs and banging drums, Alex Turner led the crowd through one more chorus, an intimate a cappella, before kicking it back into high gear in a raucous and explosive outro.

It’s amazing to think Arctic Monkeys have been delivering us hit after hit since 2007. What connects to us the most is Alex Turner’s uncanny ability to match his passion, heartache and optimism with his no-nonsense attitude. From the punk rock guitar licks to the driving bass lines and pounding drums, Arctic Monkeys has had a glorious rock-filled career with an even brighter future. After you’re done conquering the world, don’t forget to come back to sunny San Diego soon, boys.