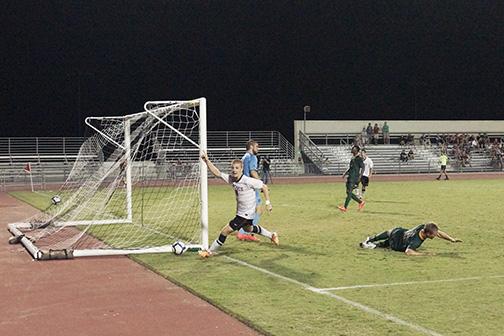 Another fan-friendly contest on Friday at the SDSU Sports Deck turned into a 3-2 win for San Diego State men’s soccer as freshman midfielder Brady Blackwell scored the game-winner against Wright State University with less than five minutes to go, sealing a fourth-straight win for SDSU.

“The winning and the mentality is something we thought we had in our team,” head coach Lev Kirshner said. “We weren’t sure, and they’re absolutely proving us correct on that.”

Fans at the game were treated to an exciting first half complete with goals, shots, missed opportunities and plenty of back-and-forth action. The Aztecs had scored early twice this year, but found themselves behind early to Wright State.

Raiders’ freshman defender Austin Polster slipped past SDSU’s junior defender Casey Phillips and hit a cross through the box that should’ve been cleared out, but Wright State’s sophomore forward Eric Lynch was waiting at the back post and one-timed the cross in for the goal.

Sophomore forward Forrayah Bass ran from the right into the box and unleashed a thunderbolt that left Raiders’ sophomore goalkeeper Tyler Blackmer frozen.

SDSU could have broken the 1-1 tie later in the half when freshman forward Donald Benamna sprinted down the field and had fellow freshman Jeff Rhodes running beside him, who would’ve been wide-open and one-on-one against the goalkeeper, but Benamna’s ball control lacked and the chance disappeared.

Benamna was also wide-open in the second half, but Bass failed to find him.

Though the Aztecs eventually got the win, Kirshner said this is something the team cannot afford to do as they move forward in the season.

“That’s us playing together (more), that’s us being a little sharper and understanding the significance of what that pass is going to be in the Pac-12 as opposed to tonight,” Kirshner said.

The Aztecs fought back and re-took the lead 2-1 through reigning Pac-12 Player of the Week David Olsen. Benamna used some crafty footwork on the left side of the box to drive in toward the goal before he sent a low ball across the box. Olsen was waiting on the far side and swept an angled shot past the ever-frozen Blackmer.

Wright State made it 2-2 after a bizarre series of events just before halftime. SDSU redshirt freshman goalkeeper Adam Allmaras tried throwing the ball up the field, but saw it bounce off the head of Raiders’ sophomore forward Marquis Payton.

He then dribbled the ball down the left side and crossed it to sophomore forward Peguy Ngatcha, who flicked the ball, which deflected off senior defender Evyn Hewett and somehow ended up in the net.

“It wasn’t our best effort in the first half,” Blackwell said, “Coach brought us in, talked to us and we came out in the second half (and) played a little better.”

When Kirshner subbed Olsen and Bass back into the game in the second half, the Aztecs looked more like the well-oiled offensive machine that they were in the first half.

“They’re just two individuals that are extremely dangerous on the ball,” Kirshner said.

As the end crept closer, the Aztecs sensed the urgency and increased the tempo, with sophomore midfielder Pablo Vasquez holding down the midfield.

With about five minutes left, Vasquez hit a perfect long pass to Bass, who controlled it and laid it off to fellow sophomore Alec Petit, whose cross found Blackwell five yards out.

Blackwell redirected the cross in and he sprinted to the bench to celebrate SDSU’s fourth win in a row, all by one goal.

The Aztecs took the field again on Sunday against Pacific University; be sure to check TheDailyAztec.com to see how they fared.