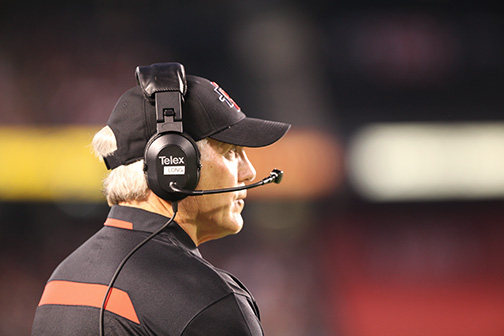 If you’re looking for a stress-free game, don’t tune into Fox Sports 1. The San Diego State Aztecs and the Oregon State University Beavers are locked in a tight game, with the Beavers leading 14-7.

Senior quarterback Quinn Kaehler still looks a little rusty from the off-season, going 7-12 for 52 yards and an interception.

Sophomore running back Donnel Pumphrey had a solid first half, carrying it 11 times for 70 yards and SDSU’s only touchdown.

SDSU looked great early on, opening the game with an eight-play, 75-yard touchdown drive on its first possession.

However, the Aztecs’ defense — specifically the secondary — made too many mistakes late in the second quarter and allowed OSU senior quarterback Sean Mannion to orchestrate an eight-play, 88-yard touchdown drive in the waning moments of the first half.

Injury news: OSU sophomore wide receiver Victor Bolden is out for the game with a dislocated pinky. He sustained the injury when the ball landed awkwardly on his pinky on a deep pass from Mannion in the second quarter.