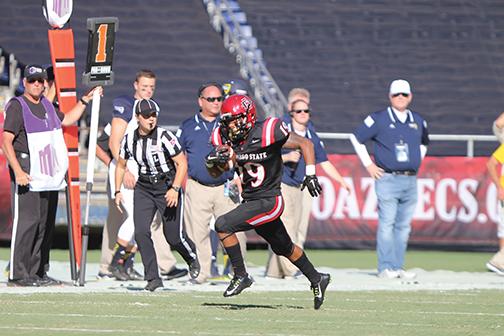 The San Diego State Aztecs started Saturday’s game against Oregon State University just the way they needed to: with a convincing eight-play touchdown drive that gave them an early lead.

Then, the team’s offense went missing for the rest of the game.

After that 75-yard march to the end zone, the team managed to add just 140 more total offensive yards and turned the ball over twice. The Aztec offense simply wasn’t good enough on Saturday and it cost the team the game.

We’ll start by looking at senior quarterback Quinn Kaehler. Although sometimes quarterbacks are given too much credit or receive too much of the blame, they do play the most important and polarizing position in the sport. Many of us love Kaehler’s story as a junior college transfer turned starting quarterback, but the fact is through three games this season, he doesn’t look as good as he did last year. He’s already thrown six picks this season — he threw nine all of last year. If he keeps up this pace, he’ll shatter his own personal bests in all the wrong ways.

His first intercepted pass was intended for sophomore wide receiver Eric Judge on a play where it looked like there may have been some miscommunication between the two. For better or worse, Kaehler still takes the blame because he’s the quarterback. The Aztecs special teams forced a fumble on the punt giving the team great field position, but the interception wasted the opportunity to add points to the scoreboard. His second interception is forgivable — down by three scores, it’s not surprising Kaehler was trying to hit deep passes down the field.

It’s important to note the Aztec offense was without one of its top weapons in senior wide receiver Ezell Ruffin, who’s accounted for 6 catches and 117 yards this season. In a passing attack that has posted 652 yards through three games, losing Ruffin this week to injury was a huge blow to the Aztecs. They had virtually no deep threat on a night when opposing OSU senior quarterback Sean Mannion was dropping bombs all over the field. Kaehler’s longest pass of the night was only 28 yards.

But this offense can get it done on the ground, too, right? Normally, yes. But it’s hard to get the ground game going when only one running back handles the bulk of the carries. After finding success on a reverse play to sophomore wide receiver Lloyd Mills, sophomore running back Donnel Pumphrey was basically given the rest of the team’s rush attempts.

“So what?” you’ll probably ask. Pumphrey is, by most accounts, a pretty good running back.

He is definitely good but he can’t carry this offense on his shoulders alone. Pumphrey doesn’t have the build to be a three-down back and much of the Aztecs’ success in t he running game this season has come from him sharing carries with junior running back Chase Price.

Speaking of Price, he had one carry for zero yards-one carry.  You’d think a running back tandem like SDSU’s would be effectively used against a power conference team like the Beavers, but Pumphrey ended up having a lopsided 17 touches compared to Price’s one.

We can speculate the reasons as to why Price didn’t get the chance to run the ball more: He could have gotten injured in his solo carry. Maybe he’s in the coaches’ doghouses for some reason. There’s only so much information yours truly can obtain from watching a web stream of the game, but watching Price sit on the sidelines was frustrating to watch nonetheless. This one falls solely on the coaching staff.

On two separate occasions, the Aztecs shot themselves by coming out with no points at the end of long drives. One lasted almost 12 minutes in the first quarter and another was about 13 minutes near the end of the game. Playing from behind, the Aztecs needed to make those drives count. They didn’t.

On a night when the defense kept Mannion out of the end zone, it’s unfortunate the Aztec offense couldn’t hold up its end of the bargain.