Marxist Moments: Our Own Chains 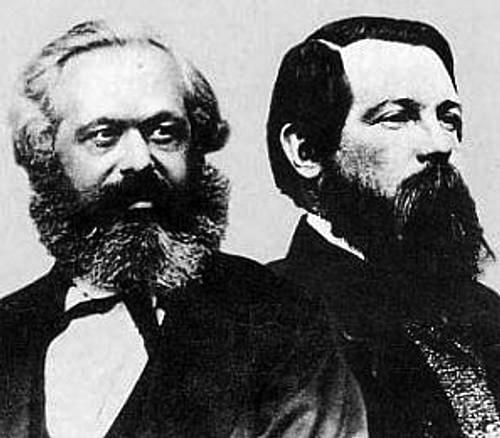 Pursuers of knowledge, welcome again to The Imperative. This week’s post is the first of a recurring theme titled: Marxist Moments. These posts will be focused on introducing topics within Marxism, examining commonly held beliefs of what it is/isn’t, and seeing if Marxism is still relevant today. Now on to today’s topic…

Marxism originated from Karl Marx and Friedrich Engels, in the nineteenth century, evolving into different variations by later thinkers like Lenin, Trotsky, Mao, and more. Today I will focus on the classical concepts of Marxism written by Marx and Engels, which is fundamentally the notion of class struggle that has existed for all of (written) history. Some, though not all examples of class struggle are the social relations between: feudal lords and serfs, masters and slaves, and most contemporarily that of the capitalist and the working classes. All of these relationships between classes are of an exploitative nature, hence the first line of chapter one in The Communist Manifesto, “The history of all hitherto existing society is the history of class struggles.”

Now before I go on, I must make a clear point that there are different variations of Marxism, i.e. Leninism, Stalinism, etc., and we should note that the historical practice of some communist leaders is not necessarily representative of all or fundamental Marxist theory. McCarthyism and other Cold War sentiments have left a bitter taste in many mouths, equating socialism the “S” word to be heresy. However, societies and ideas change, and it is in the interest of those who have power to not lose it, regardless of beneficial outcomes to others. Do you think a lord or serf in the feudal ages believed that there would be a next society, let alone a capitalist one? In a society of free thought and speech, we should examine all theory in order to find the truth wherever it may take us – The (Philosophical) struggle is real…. Onward to explain some important terms.

Marxist terminology for these are:

In the capitalist Mode of Production, the capitalist class (the bourgeoisie) which owns the Means of Production exploits the working class (the proletariat) by giving them a wage for their work, but keeping all of the profit for themselves. The bourgeoisie seeks to obtain the largest profit at the least cost, so purchasing new machines to replace workers and be more productive and compete with other capitalists would be necessary to continue. Another way they can maximize their financial goals is to pay the workers lower wages.

Marxism’s issue with this picture is that the workers are the ones who do the work and are exploited at the expense of the capitalists, who keep all of the profits. With an entire system structured around this process, workers must compete against other workers in order to make a wage and survive. Noam Chomsky, a public intellectual and professor of linguistics, and self-proclaimed anarchist called wage labor, “Not very different from chattel slavery […] that there isn’t much difference between selling yourself and renting yourself. So the idea of renting yourself, meaning working for wages, was degrading…it was just an attack on your personal integrity.”1 As written by Marx and Engels, this is the “invisible chains” that bind the workers from their own freedom, and in their concluding words of The Communist Manifesto they wrote:

The Proletarians have nothing to lose but their chains. they have a world to win. Working men of all countries unite!

Is Marxism still important to today’s society? Debates regarding minimum wages, worker’s rights, and future social policies are still hot topics that come up today. Marxism claimed that societies eventually evolve into different ones, with some claiming a future society of communism, typically after a socialist one, where there is no classes and exploitation regarding class relationship would be non-existent. But what kind of a society would that even look like? How would we get there? And is it even really feasible? Francis Fukuyama, an American political scientist and economist, wrote in his book The End of History and the Last Man that a society very much like ours is the final stage of social development, contrary to Marxist commentators! So what does the future hold?

These will be some interesting questions to examine for future posts!

Once again, Marxism (and its variations) are not limited to what I have just written here, and the intention of this post is strictly to examine various philosophic and political theories so as to encourage critical thinking and discussion strictly pertaining to various ideas of our history. One of the purposes of history is to learn from our past.

If you are interested some more info on this topic, a good starting place is at: https://www.marxists.org/

Also, other philosophic topics can be searched for at this excellent resource here:

Here’s some wisdom until next time:

I think we all have moments where we forget other people are humans too. They think, feel, breathe and suffer just like I do. Knowing what it’s like to be living and experiencing and sharing a common end, we should try to be considerate to the other persons we run into. And those we never will.