Blame the NCAA not the ‘zebras’ 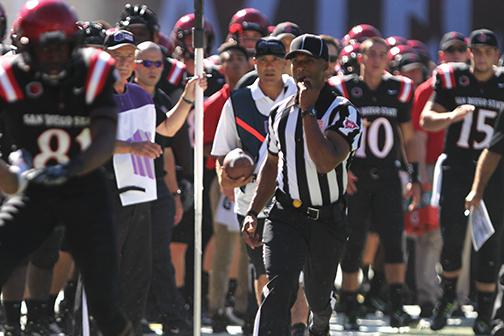 It’s that time of year again. That time when people of normally sound minds stand in their living rooms, dorms and bars to scream at television sets as if the broadcast image is capable of hearing them.

Yep, it’s football season. We love football season. But we despise football officiating — really, really despise them. Most especially those Mountain West “zebras,” who were so bad that the conference uncharacteristically apologized to San Diego State for nine incorrect calls made against SDSU in just one game. Yeah, refs stink.

But I didn’t come here to bury them. Instead, let’s look at this from a different angle. Is it possible that the problem of poor officiating is actually the way they are placed on the field, as well as the way rules are written?

First, I myself am an official. I don’t referee football, but I do umpire baseball. That’s a potential conflict of interest, but the thing about officiating is the more you care about doing it right, the more you realize that making the right call is more important than wanting to be liked. In other words, there are times the fans, coaches and players are wrong, but there are also times when the officials deserve the blame.

The first thing to understand is that officials have assigned mechanics. If you watch baseball, hockey or basketball officials, you’ll notice that they are almost always standing still. There’s a reason for that. When you’re still, your eyes aren’t bouncing around. Still eyes make for clearer vision and, hopefully, that makes for better calls. There are football officials who stay stationary, too. We all notice the poor umpire getting hit by passes and players running up the middle, but that’s where he’s supposed to stand.

It’s the ones who are rarely stationary causing the most controversies. Those three officials lining up in the defensive backfield are always moving because they can’t keep up with the players. Is it any wonder, then, that they miss all those pass interference calls that leave us choking on our popcorn? With pass interference becoming more of an issue every year, the NCAA — and the NFL, too — must find a way to position those officials that minimizes their movements.

At other times the rulebook creates problems unnecessarily.

Baseball rules are relatively simple. A runner is safe unless he’s out and, believe or not, the strike zone is precisely defined. But football leaves too much up to an official’s discretion. The NCAA rulebook’s interpretation of a legal catch covers two pages, but still relies on the confusing “perform an act common to the game” part. It tries to define that, but something so bizarrely worded eludes definition.

Interestingly, the rule book also covers the philosophical quandary known as “moving laces.” Watch any telecast and you’re bound to hear the announcers exclaiming that the football’s laces were moving while the ball was being cradled by a receiver. They’ll say that proves the receiver didn’t catch it. However, the rulebook clearly states that a moving football doesn’t signify loss of control. Yet, that’ll also be what the referee defaults to in the final ruling, even though he or she should know better.

Rules can be simplified, or just written with clear, concise wording. Either repositioning or adding more officials can reduce blurry eyes caused by officials making calls on the run. And the game can be made better as a result. The question is: Does the NCAA want to?