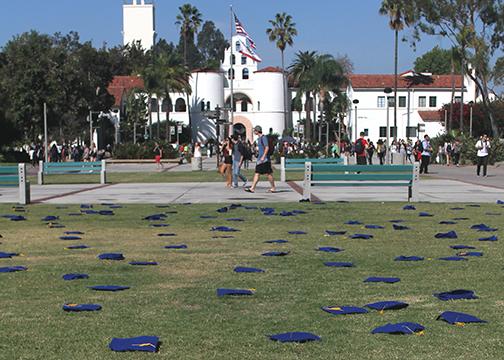 by David Hernandez and Jamie Ballard

During the day, 1,100 graduation caps were laid on the grass on Campanile Walkway, representing the approximate number of students nationwide who committed suicide last year.

“We’re creating that visual so students are actually seeing what is going on in our country and recognizing that suicide is 100 percent preventable,” Active Minds President and psychology senior Lauren Hughes said. “So if we can see this and realize that we can prevent this as much as we can … that can go a long way in promoting the success of our students.”

Hughes said there are many factors that make suicide a prevalent issue on college campuses: adjusting to new settings, worrying about finances, finding new friends, balancing school work and a job, and more.

“There’s just a lot of stressors that can potentially hinder a student and academic success, and I think since the majority of students are going through this transition, it gets to be kind of hard to handle sometimes,” she said.

Hughes said a quality conversation with someone could change his or her life.

Members of Active Minds set up a table to educate students about suicide prevention and inform them of Active Mind events as well as resources available to them through SDSU Counseling and Psychological Services.

Signs set up along Campanile Walkway had the suicide prevention hotline, suicide warning signs and facts written on them.

“The signs are out so students don’t just see the graduation caps but also recognize that it is in regards to suicide prevention and educating them even if they’re not coming to speak to us directly,” Hughes said.

Hughes said her family has been impacted by suicide.

“If I can be out here and preventing it as much as possible, then that’s what I’m going to do, and I’m going to bring it to college campuses because I feel it’s a very prevalent issue in college.”

Active Minds also held a candlelight vigil in the evening. Students wrote words of encouragement or shared their personal losses by writing on paper bags. The bags contained LEED candles that were lit up along Campanile Walkway.

Messages written on the paper bags included, “It’s okay to ask for help. You are not alone,” and “Reach Out.” Others simply had a name of a friend or relative that committed suicide.

One survivor wrote out his or her story to tell others that, “it was definitely worth it to keep going. We’re all fighting for life together.”

Junior student Johannah Fernandes attended the candlelight vigil, partially because one of her loved ones recently attempted to commit suicide and was unsuccessful.

“It’s very important, because not only does it affect the person thinking about it — everybody is affected,” she said. “It’s really important for people contemplating it to know that they’re not alone.”

“Having a university that’s a part of such a larger picture is a cool aspect of what we’re doing,” Hughes said.