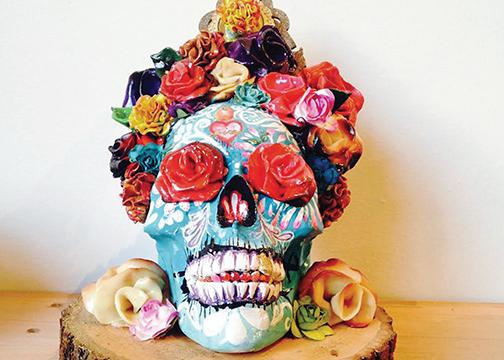 On Saturday, Nov. 1, La Bodega Gallery in Barrio Logan held a group art show from 5-10 p.m. in honor of Dia de los Muertos. Walls covered with traditional skulls and decorated in varying styles enclosed the gallery as homage to the celebration for the dead.

Dia de los Muertos is a Mexican holiday celebrated from Nov. 1-2 to recognize and embrace death as well as loved ones that have passed. This festivity consists of parades, music, food, altars, sugar skull face painting and traditional Mexican attire.

The La Bodega Gallery event encompassed just that by emphasizing the sugar skull. More than 50 artists got together to create their own unique takes on the quintessential Mexican symbol. They varied from decorative, brightly colored skulls to more meaningful pieces illustrating heritage, religion and beyond. All finished skulls were up for sale with prices ranging from $40 to $400.

In the back of the gallery was a large altar for the public to contribute their photos, flowers and quirky offerings for friends and family that have died. At the end of the exhibit was a secluded studio where artist David Van Gough held his art pieces.

Van Gough’s presence was especially fitting for Dia de los Muertos. He draws inspiration from surrealism, realism, and 19th century artists, and he first discovered his style when looking at a monograph of Hieronymus Bosch’s “Garden of Earthly Delights.” He categorizes his style as necrorealism, an art style that brings life to death. All of his pieces consist of dark colors and motifs for mortality. The recent “Purgatorium” exhibition by Van Gough displays that with pieces presenting the contrast of the darkness of hell and light in dying itself.

Van Gough’s collection “Visage” deviates from his typical art pieces as it is portraiture. Nevertheless, the artist was able to incorporate his style into portraits, painting historical figures at an older age and displaying their aging lines with a precise finish. The Dia de los Muertos group art show, held by La Bodega gallery, paid respects to this celebration and shed new light on the theme of mortality for all.