The Main voice inside Viejas Arena 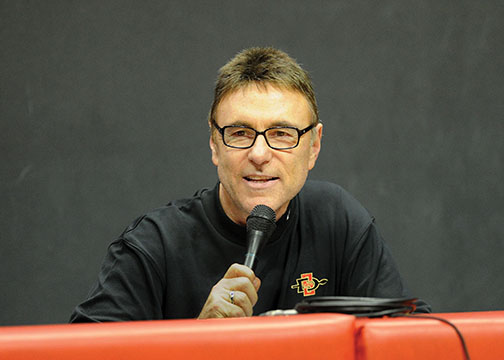 Back when he first started as the public address announcer of the Aztecs in 2001, Bryan Main colored himself fortunate to have 2,500 people inside Viejas Arena  hear him announce a San Diego State men’s basketball game.

About a decade and some change later, the San Diego native still considers himself lucky to hear his own voice over the deafening “I Believe” chants echoing in support of Steve Fisher and his troops.

“It’s magic in there,” Main said. “The atmosphere and the way ‘The Show’ and the student section has progressed along with the team; now San Diego State’s on the map. There’s guys turning down scholarships to big schools to come here and that says something about the program.”

Main’s journey as the voice of the Aztecs began around the time Fisher was hired on as the head coach on Montezuma Mesa. As the legendary tale goes, Fisher would take to the campus grounds and pass out free tickets in hopes of creating some Aztec faithful.

Things are a bit different now, not only for the team, but for Main as well.

“I’ve progressed too, not only has the team progressed,” Main said. “I had to up my game as the team upped its game. There’s been a definite metamorphosis from the first (game) to where we are now.”

With such a natural flair and ability to call the game, it’d be somewhat safe to assume Main grew up a fan of ankle-breaking crossovers and Jordan-esque slam dunks. But you all know what they say about assuming.

“Hockey’s my first love because I played hockey,” Main said of his days on the ice at Northern Arizona University in the ‘70s. “I love doing hockey. There was no replacing hockey.”

“I can tell you now, since I’ve been doing basketball, that’s my number one sport. I’ve got to put hockey behind it right now because of the excitement and just because of the whole feeling in that arena.”

That “excitement” doesn’t just happen overnight. For as much as a tide-shifting 3-pointer can shake an entire arena, Main is there to play a pivotal role too. His calls, his excitement and his emphasis can help an otherwise lackluster crowd of 12,414 grow tired of sitting. He knows this; but he also recognizes the bigger picture.

He’s a support system, he’s there to be part of the action. He can feel when the crowd feeds off of him, as well as when he feeds off of the crowd. It’s about as give and take as a Thames-to-Polee fast break. As things start to happen and the tempo of the game increases, Main is always there to match that tempo.

Through a successful 14-year career as the voice that echoed inside of Rocky Long’s contests at Qualcomm Stadium and Fisher’s conquests at Viejas Arena, Main’s support for the Aztecs has grown. It’s grown so much that most wouldn’t have thought anything of his announcements during the football team’s home opener against his alma mater. It was the first time he’d called a football game against his former team.

He was teased inside of the booth prior to the game to not show any favoritism toward the Lumberjacks. He brushed the jokes aside, stating that his tenure with SDSU has since motivated him to shave his proverbial beard and trade in his axe for a spear.

“NAU is a distant memory, they’re good memories, they’re fun memories but I’m an Aztec,” he said. “My allegiance is to San Diego State, through the good and the bad.”

As he gears up for his 15th year behind the microphone inside of Viejas Arena, Main can only be thankful to the powers that be at SDSU for giving him the opportunity to showcase his God-given talent. But with a voice like his, it’s a safe bet that they’re thankful, too.