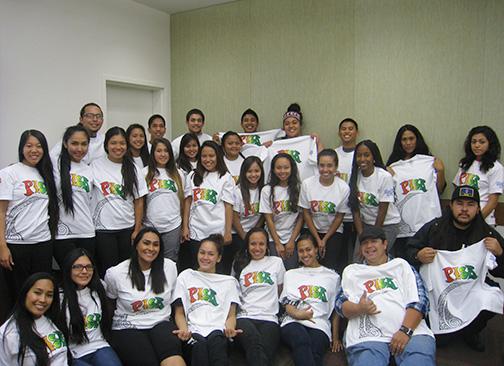 A large school such as San Diego State, with approximately 32,000 students, can make it easy for certain cultural groups to fall under the radar. An SDSU cultural organization that helps to promote awareness of one of these underrepresented cultures is the Pacific Islander Student Association.

Biology senior Sosefina Pahulu is a former PISA president and a current outreach member. She spoke about PISA’s mission as an organization.

“Our main goal is to promote higher education to Pacific Islander youth, because we account for such a small percentage (of students) in colleges and universities,” Pahulu said.

Pacific Islanders, which make up less than eight percent of SDSU students, include people with cultural backgrounds from Polynesia, Micronesia, and Melanesia. Although Pacific Islanders such as Native Hawaiians, Samoans, Tongans, and Guamanians are some of the fastest growing ethnic groups in the United States, recent years have begun to show an overall decline of Pacific Islanders in higher education.

According to an article by NBC news, “only 18 percent of Pacific Islander adults have a bachelor’s degree, a rate rivaling Hispanics and African Americans.”

Pacific Islanders are also about half as likely as the general population to hold bachelor’s degrees. These dismal statistics are some of the reasons why SDSU PISA has been dedicated to providing San Diego’s Pacific Islander youth with the tools and knowledge necessary to get into college since 1996.

The conference will also have a tour of SDSU’s campus, scholarship opportunities, a special guest performance and a talent competition where high school Pacific Islander clubs will have the chance to win a spot to perform at the annual PISA spring luau in 2015. The event’s keynote speaker, Tana Lepule, one of the founding members of PISA and a graduate of SDSU, will also talk to the students about his path to success.

PISA’s high school conference will be an electrifying event for both Pacific Islander students in San Diego and PISA’s current members, many of who have yet to see a conference in action due to a two-year hiatus caused by lack of funds and resources.

“We have gotten a lot of help with PISA this year trying to bring back the high school conference from alumni, families of alumni, and families of current PISA members,” Pahulu said.

Pahulu also emphasized the importance of the event in helping to increase the turn out of Pacific Islanders in higher education, whether it is at SDSU or another university.

Registration for “Our Roots Will Rise” will begin at 8 a.m. and will be held from 9 a.m. – 4 p.m. on Saturday, Nov. 22, on campus at the Conrad Prebys Aztec Student Union. The event is free, however PISA will be collecting donations at the conference to raise money for scholarships that will be presented at its spring luau.

There is no cost to join PISA. Meetings happen from 5 p.m. to 7 p.m. every Tuesday in the Conrad Prebys Aztec Student Union, where plans for many different fundraising events are discussed and Polynesian dance practices are held. PISA can also be seen tabling around SDSU, and lending helping hands to other SDSU organizations, performing at various events.

The organization, which currently consists of approximately 30 members and a strong basis of alumni from both Pacific Islander and non-Pacific Islander backgrounds, is always welcoming new members who share a love and interest for the island cultures.

“PISA provides its members with a sense of family, a sense of connection, and a chance to network with the Pacific Islander community,” Pahulu said.