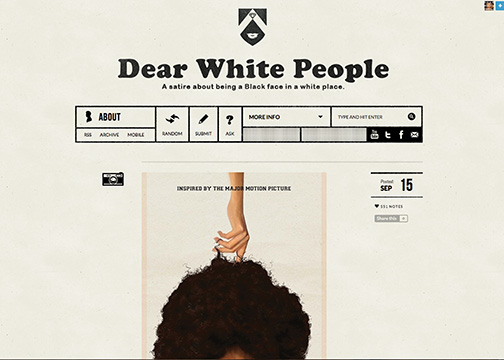 As the end credits of “Dear White People” began to roll, I snapped back to reality. Alongside the names of the people involved in the film was a montage of pictures, not of the film but of blackface Halloween parties at colleges across the nation, much like the party that enraged students in the film. From pictures of white fraternity brothers in blackface and grills from Dartmouth to a “Compton Cookout” party at University of California, San Diego, the mere existence of these parties was shocking.

What turned out to be even more shocking was how recently these parties occurred. Many of the parties projected during the film have taken place within the past three years.

“Dear White People” is a satirical film written and directed by newcomer director Justin Simien, who addresses this issue of racism on predominantly white campuses. The film centers on an ensemble of black characters on a predominantly white Ivy League campus where tensions between black students and white students heat up when an all-white satirical publication on campus hosts a blackface Halloween party.

This is a brave film, no doubt. The director challenges the audience to acknowledge that these racist parties don’t only exist in fiction but extends into the reality we live in today. With Barack Obama in office as president today, we are often told that racism in America is dead. However, should we hold the logic that art imitates true life, this film should firmly tell you that this is nothing but a lie.

It becomes clearer as the film progresses that the film isn’t focused on the racism itself but about portraying the multi-faceted challenges of the film’s complex characters of color and their racial identities. What does it mean to be black? What is “blackness?” Some reject it, some fight for it and some discover it.

The black students are led by biracial media student Sam White. She is infamously known as the radical host of her radio and YouTube show, “Dear White People,” which calls out the white students on the micro-aggressions she faces as a “black face in a white place.” She leads a struggle against the diversifying of campus housing, seeking to keep her campus living house all-black. However, she also undergoes an internal struggle tearing her between her ideologies and activism as a vocal black student on campus and her disillusionment of being an infallible symbol for her followers. In the midst of the chaos, she struggles to keep her relationship with her white teaching assistant a secret, a taboo act out of line with her cause.

On the other hand, we have our “technically black” Lionel Higgins, who deals with his peers, black and white, attempting to put him in the correct color-coded racial identity he is supposed to presume. His white peers view him as their token black male and his black peers reject him because he wears cardigans and listens to Mumford and Sons. He belongs to no one yet belongs to everyone. On top of this, Lionel is in the process of coming out, leading for him to not only come to terms with his racial identity but also his sexuality.

We also have Troy, the black dean’s son who wishes to join the ranks of an all-white social club, and Coco, a black student who wears blue contacts and a weave while rejecting any association with the black community on campus.

The white characters in the film pale in comparison to the black characters and their struggles and complexities. The racism perpetrated by the white character’s micro-aggressions and the blackface party act as only a backdrop to the inner frustrations these students have with racism, and most importantly how race relates to them.

Despite being a satire, the film is a dark look at the faults on both sides here. Yes, the white people in this film are racist jerks. However, the indiscriminate prejudice seen from Sam and her fellow activists against the white majority, as well as black students like Lionel who don’t fit the norm on her campus, raises a complex question of the nature of racial consciousness among people of color in America today. Can we see the person beyond his or her race? This is the age-old lesson that characters, black and white, learn as the movie progresses.

This is a satirical comedy film, so feel free to laugh while knowing there’s a bitter truth behind the comedy. “Dear White People” isn’t joking when it comes to centering a serious dialogue about race in a America today, a country scared witless to face the realities of racism against black Americans. This fear of racial dialogue in 2014 has contributed to the surrealism of the mere thought of a blackface party taking place in reality.

Where Simien succeeds is in snapping the audience back to reality by saying that yes, this is the reality of race in America today and yes, this is an issue. At the end of the race-fueled chaos, the simple act of projecting pictures of real-life blackface parties that have occurred within the past three years answer the very question of why “Dear White People” needed to exist in the first place.