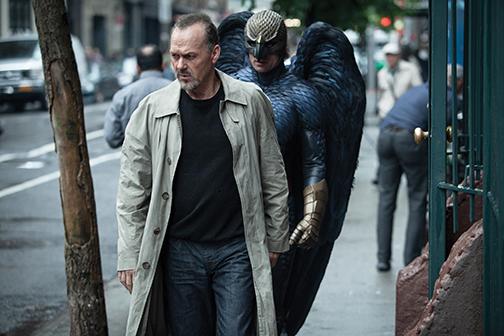 Every year there seems to be a certain flick that keeps Hollywood buzzing, especially around the award-show season. This year, that flick was “Birdman.”

“Birdman” garnered a multitude of award nominations in both the Academy Awards and Golden Globes, and it’s for a good reason. Between the seasoned cast and excellent cinematography, it’s no surprise “Birdman” is a sweeping sensation in the film community. Michael Keaton took home the Golden Globe for Best Actor in a Motion Picture, Musical or Comedy and director Alejandro González Iñárritu received the Golden Globe for Best Screenplay and Best Motion Picture.

Besides being well executed, “Birdman” has an interesting story line. The film follows washed-up actor Riggan (Michael Keaton) as he attempts to return to his stardom of yesteryear by writing, directing and starring in a Broadway show.

Riggan shot into the limelight early in his career after starring as the superhero Birdman. In his eyes, succeeding on Broadway will allow himself to become relevant in the eyes of the public again. The film shadows the actor through the last few days of the rehearsal of his play before its career-deciding premiere.

All the cinematography is fluid. There appears to be no cuts at all, so it seems as if the whole film was shot in a single take ­— an exceptional task. This style lets viewers feel intimately close to the characters in the film. This manner in which the film follows its lead character is something not seen all that often in cinema, especially for an almost two-hour movie.

The performance by the cast as a whole is superb as well. While Michael Keaton is exceptional in his leading role, a class-act cast that includes Edward Norton, Emma Stone, Zach Galifiankis and Naomi Watts also surrounds him.  The star-studded cast pushes the plot along quite nicely. It’s also interesting seeing actors portray actors on the big screen, especially when their characters get in character.

The main driving force of the film is Riggan’s internal struggle between himself and the voice inside his head of his old character Birdman.  The Birdman character gives Riggan the superhuman powers of levitation, telekinesis as well as others. However, it is up to the audience to decide if Riggan can actually do these things or if it’s simply his mind taking over his body.

All the subplots are connected to Riggan as well. His daughter Sam (Emma Stone) struggled through drug addiction and now serves as personal assistant. Sam starts to become involved with renegade actor Mike (Edward Norton), which only adds to the worries of her father Riggan. All the subplots keep the overall plot moving smoothly.

However, the climax comes very late and very close to the end of the film. It’s not so much abrupt as it is unfulfilling. The final scene occurs and leaves the audience in somewhat a state of confusion. It can be interpreted in multiple ways causing a small lack of satisfaction at the film’s end.

Despite the obscure ending, “Birdman” is still worth checking out. The film makes it perfectly clear why it’s received so many awards and nominations. The blend of comedy, drama, acting and cinematography are obvious reasons why this is a must-see and one of the best films of the year.