Aztecs to play in Gwynn’s memory 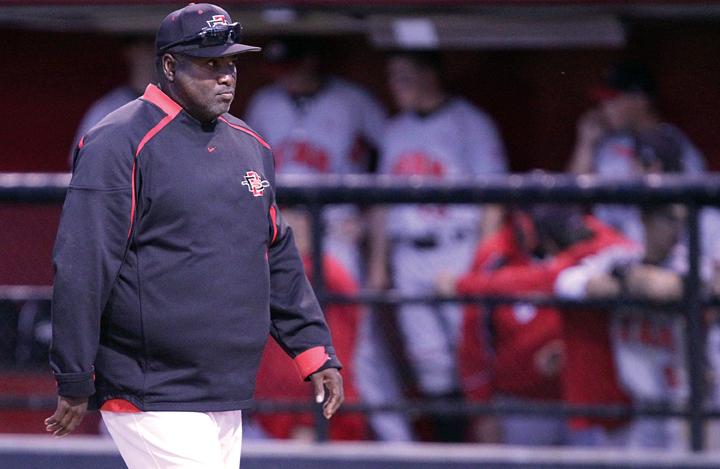 From the moment the San Diego State baseball team stepped on the plane after losing two games in a row last May at regionals, they knew they’d have to make some changes if they wanted to make it deeper into the tournament next year.

Those changes weren’t going to be easy.

This summer the Aztecs lost their head coach of 12 seasons, Tony Gwynn, to cancer. As if losing a coach wasn’t enough, the team also had some of their strong veteran players graduate including their shortstop, second baseman and catcher.

While the Aztecs knew the dynamic of the team would be different this season, junior right-handed pitcher Bubba Derby said the team plans to only look forward.

“We have become a lot stronger this year with a new weight lifting program, which is something we have lacked in the past,” Derby said. “We’ve also gained more confidence than ever before and we know we can take any team we come across.”

Derby said this year is for Coach Gwynn and his memory.

Leading the Aztecs is new head coach Mark Martinez. Martinez worked under Gwynn as the assistant coach for nine seasons before stepping in last March when Gwynn left to take care of his health.

Martinez said having veteran players on the team has helped the transition into the new season.

“Because Martinez has been in the program for so long under coach Gwynn, their coaching styles are very similar,” senior right-handed pitcher and outfielder Steven Pallares said. “After seeing how coach Martinez handled the season with Gwynn’s absence and seeing how well we did, I believe there’s a bright future for us.”

Last season the Aztecs finished with an overall record of 42-21, a Mountain West Tournament title and an appearance in an NCAA Regional Tournament.

Junior infielder Danny Sheehan said this season the team has made it their goal to win another MW Championship and make it to the College World Series in Omaha. Although they’ve put in a lot of hard work in these months leading up to the season, he said that work cannot stop now.

“As far as non-conference goes, Texas Tech will be a huge series for us because they are coming off a World Series bid,” Sheehan said. “As far as conference goes, we are going to have to give it our all because the opposing teams do a great job winning on their home fields.”

The Aztecs will begin their season with a three-game series against Valparaiso starting on Feb. 13. The team will honor the memory of Gwynn with several events that weekend including the retirement of his SDSU jersey number, 19.

“We’re going to remember Tony we’re not going to forget his legacy and we’re going to continue build our program around the ideals he left behind,” Martinez said.