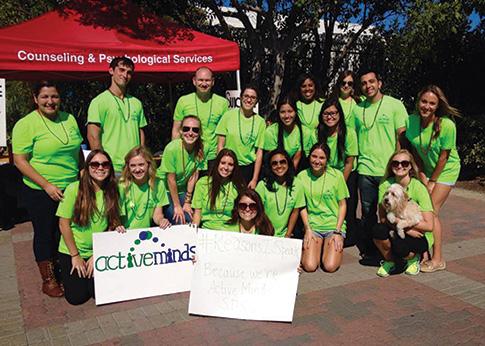 When hearing certain words, it’s common to associate them with other things. For example, when the subject of allergies is brought to attention, many individuals imagine sneezing, watery eyes and pollen. However, when the subject of mental health is brought to attention, many false associations occur. With nearly one in five Americans suffering from a mental illness, it’s about time people approach this matter accordingly. The false perception of mental health is what the Active Minds club works tirelessly to change.

Active Minds is a student-run organization geared toward changing the conversation about mental health.

In today’s society, the subject of mental health isn’t discussed very often, and many feel uncomfortable confronting the issue. This organization focuses on making students more aware of these pressing issues, and provides resources to those who may be suffering a mental illness. Active Minds is a peer-to-peer group closely associated with trained psychologists that try to create a comforting environment for inflicted students.

“Before joining Active Minds, I had no idea how hard it can be for someone to seek help because of the fear that they will be judged or looked down upon,” biology and psychology senior and publicity chair Cody Johnson said.

The actions of the Active Minds club do not go unnoticed. In October, more than 1,000 graduation caps were scattered along the grass patches of Campanile Walkway to signify the number of students nationwide who had committed suicide in the previous year.

This event was a bold statement and a powerful visual representation that showed the large number of lives lost by mental illness in college-aged students.

Another recent event hosted by Active Minds was a candle light vigil held to honor those whose lives were lost to mental illnesses. The attendees of the vigil connected to form a community unified by those who had lost loved ones to suicide, or who had previously suffered suicidal thoughts.

“Unity lit up on Campanile that night,” Hughes said.

Tabling efforts play a big part in the dynamic of Active Minds. During these tabling events, students reach out to club members and openly discuss topics such as depression, stress and anxiety. Millions of people have been affected by mental illness.

“Because of my involvement in Active Minds, I have broadened my mind more than I have been able to in a classroom,” Hughes said.

Active Minds has various activities planned for this semester, including Love Your Body Day, body positivity for National Eating Disorder Week and relaxation stations. During finals week, students can go to an interactive relaxation station and discuss coping mechanisms for stress with their peers. The relaxation station shows students that they are not alone in their struggles, and the free scantrons are a definite bonus.

The members of Active Minds are a closely knit group dedicated to helping improve the mental health of others.

“This group brings light to a lot of struggles that are common amongst people, especially college-aged people, that are not commonly or comfortably talked about, and the group tries to bring it to the larger community of SDSU,” child development senior Megan Conlon said.

As outsiders who may want to help the cause, simple gestures are the most effective in revolutionizing the stigma surrounding mental health. Becoming educated on the subject and abandoning words such as “psycho” and “crazy” can reduce the negative feelings associated with mental illness.

“Being in Active Minds has made me more conscientious of the kinds of words that I use, for example, not calling things crazy,” Johnson said.

For students looking to change the conversation about mental illness and impact the lives of others, Active Minds is the organization to join. Whether it be through the efforts taken by reaching out to veterans or informing students about the free massage chairs located in the Counseling and Psychological Services building, Active Minds strives to alter the current perception of mental health to create a better future.

Tackling mental illness is all about prevention.