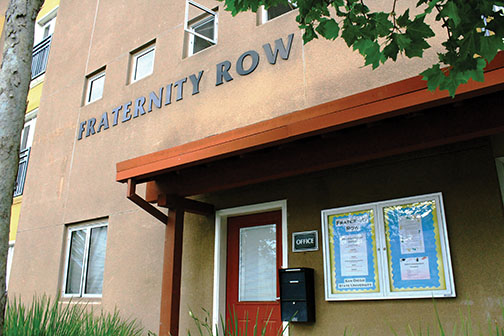 Student Life and Leadership issued Sigma Phi Epsilon a warning after members of the fraternity allegedly yelled obscenities during a rally against sexual assault last semester.

The fraternity will have to undergo educational training and participate in events that educate the Greek community on sexual violence as part of the warning.

Based on the investigation conducted by Student Life and Leadership that concluded last month, the university decided it is likely that certain individuals of the Sigma Phi Epsilon fraternity engaged with the marchers of the anti-rape event.

“The names of the members that were identified to be involved in the incident were forwarded to the campus Title IX Coordinator for further review” Associate Vice President for Campus Life Christy Samarkos said. “Being that these individuals committed these behaviors in a facility owned by the chapter and the manner in which the chapter members reacted to the allegations, there was sufficient information to warrant a warning.”

During the investigation the Student Life and Leadership staff spoke with various individuals, including the individuals accused of harassment to better understand what occurred during the anti-rape rally.

Aside from the warning, the fraternity received educational sanctions require Sigma Phi Epsilon to:

Support the Interfraternity Council moratorium on social events and fully participate in required activities that educate the Greek community on sexual violence as agreed upon earlier in the academic year.
Develop and implement a program that addresses sexual violence and bystander intervention with cooperation of their national office and SDSU Student Life and Leadership staff members.

Every member of the house is required to participate in the program mentioned above and must complete it by April 1.

Samarkos said Sigma Phi Epsilon members, its advisors, alumni and national representatives have been cooperative in the process.

The fraternity underwent an investigation after a Take Back the Night rally against sexual assault on Nov. 21 in which rally marchers said they were harassed by fraternity members of Sigma Phi Epsilon and Delta Sigma Phi.

After an investigation, Delta Sigma Phi was shut down due to various violations throughout the semester, including the harassment that occurred during the anti-rape rally.

Director of Student Life and Leadership Randy Timm  and the Sigma Phi Epsilon President and did not return requests to comment.