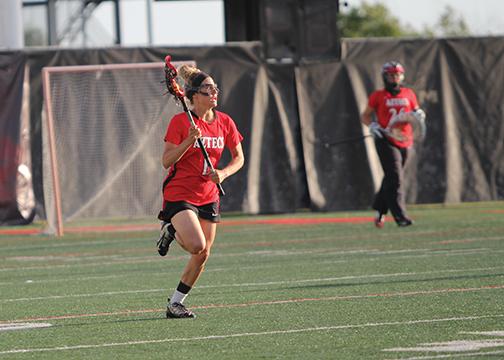 Liberty University came out strong on Friday, taking an early 3-1 lead and settling the crowd.

The Aztecs didn’t come out as strong.

“We came out too excited,” head coach Kylee White said after the Liberty game. “We were too amped up and made unforced errors.”

A goal by redshirt-junior midfielder Sophie Koubek at the 15:59 mark started a 3-0 run. The Aztecs took a 4-3 lead.

Up 7-6 at halftime, Liberty kept up with SDSU in the beginning of the second period. It tied the game at 8-8 with 23:04 remaining in the half. That is when the Aztecs cleaned up their game and took control.

Ricciardulli and Comfort each scored a team-high four goals on the day, raising their season totals to twelve and eight, respectively as of Friday.

Despite four late goals by Liberty, SDSU maintained a sizable lead, scoring the final two goals to push the final score to 18–12.

In its Sunday afternoon contest vs. University of California, Berkeley, the Aztecs fell behind early — just as it had in its previous game against Liberty. After a goal by California’s senior attacker Brittany Ward at the 19:06 mark, SDSU trailed 4-1.

As in previous situation, the Aztecs were not fazed by the deficit. SDSU quickly bounced back, going on a 4-0 run to take a 5-4 lead with 6:01 left in the first half. This was the first of two such runs in the game. The Aztecs would not lose the lead again.

By halftime, the lead was 7-6, and coach Kylee White saw what needed to change.

“At halftime we addressed that Cal was beating us in hustle plays. But in the second half we dominated the hustle plays,” she said.

The improvements proved essential to the game. In the entirety of the second half, SDSU outscored the Golden Bears 13-8 and outshot them 20-13. The final score was 20-14 in favor of the Aztecs.

Wednesday’s matchup against Winthrop University wasn’t nearly like the previous two games. The Aztecs came out strong, traded some leads throughout the first 20 minutes of play before taking control of the game to win 17-7.

The Aztecs love playing in front of the great crowd.

“We are very excited to be home,” White said. “The girls were pumped. I didn’t need to say much to them before the game.”

She also still sees a lot of room for improvement.

“We have to pass and catch well to be able to play our game,” she said. “We had a lot of shots tonight, but we still need to work on our patience.”

Up next for Aztec lacrosse is a matchup against the Gaels of Saint Mary’s College where SDSU will try and cap of an undefeated homestand. The ladies take the field at noon on Sunday at the Aztec Lacrosse Field.