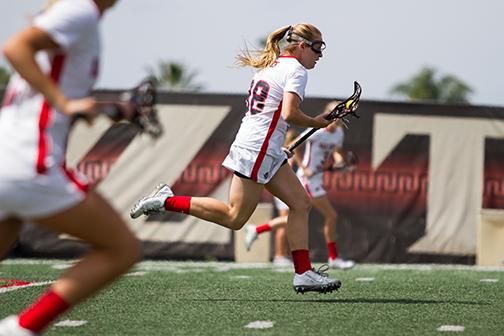 The San Diego State lacrosse team is leaving the Bay Area in no better shape than when it arrived.

The team went 1-1 on the weekend, losing to the talented University of Stanford Cardinal and bouncing back for a victory against University of California, Davis.

SDSU scored the opening goal in the contest via an unassisted strike by redshirt-junior midfielder Sophie Koubek at the 28:50 mark in the first half. Koubek scored four goals on the day, leading all SDSU players.

This would be the only lead it held all day.

Stanford tore the game open at the end of the first half. Already leading 9-5, redshirt-senior attacker Rachel Ozer scored with 1:28 left in the half.

This goal started a 6-0 run by the Cardinal that had it leading 15-5 by the next time the Aztecs scored.

One of those threats is Ozer, who tallied five goals and one assist. Other big contributors were junior midfielder Lucy Dikeou and junior attacker Alexandra Crerend, who added a combined seven goals and four assists.

Stanford never took its foot off the gas, going on a 5-0 run in the second half. The Cardinal scored its final goal with only eleven seconds remaining to push the final score to 22-10.

Despite the late scoring, White had only good things to say of Stanford’s performance.

“They capitalized on every single opportunity,” she said.

They had plenty of opportunities, taking 38 shots in the game.

Stanford’s teamwork also made a huge difference in the contest. The Cardinal ended the day with 10 assists against SDSU’s two, both by senior attacker Michaela Jarvis.

Even in the blowout loss, White still saw a lot of good things from her Aztecs against the very talented Cardinal.

“I thought our team actually played very well, both offensively and defensively. It was just very hard to gain momentum when you don’t have possession of the ball,” she said.

Luckily, the Aztecs had an opportunity to get back on track Sunday against the Aggies.

SDSU came out very strong, opening up a comfortable 10-4 lead at halftime. Senior Christina Ricciardulli midfielder and junior midfielder Alexa Comfort each scored two goals in the opening period. Junior midfielder Felice Artuso added two goals and one assist. But Davis was not ready to give in.

Starting with a goal by senior attacker and leading scorer Elizabeth Landry at the 22:38 mark, the Aggies went on a 4-0 run to put SDSU’s lead at 11-9.

“We knew we were the better team,” she said. “They stuck to the game plan, moving the ball quickly and finding the openings that I told them they would find.”

The Aztecs held off the resilient Aggies for the rest of the contest, scoring one final goal and leaving the city of Davis with a 12-9 win.

The Aztecs were much more balanced, receiving scoring contributions from seven different players. The team also tallied seven assists from six players, a huge improvement from the Aztecs’ previous game.

White is focusing on one thing that her team needs to work on after this weekend’s games.

“We have to refocus on draw control. We have been dominated on any sort of possession play,” she said. “The draw is one of the most important parts of our game.”