Whedon wins over audiences with sequel 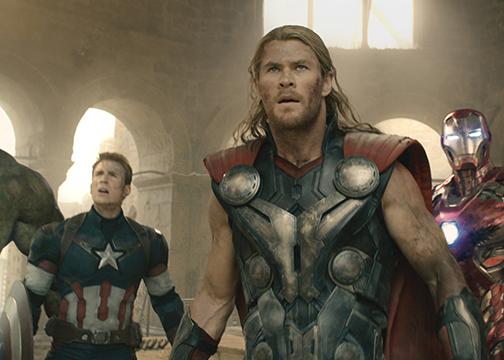 Writer and director Joss Whedon sure had a lot on his plate when filming “Avengers: Age of Ultron.” Whedon had to figure out how to make a sequel to “The Avengers” that would be even more successful than his beloved blockbuster. It turns out he bit off more than he could chew with his final cut, but that does not stop the eleventh entry in the Marvel Cinematic Universe from being a thrilling joyride.

Iron Man himself, Stark Stark (Robert Downey Jr.), Thor (Chris Hemsworth), the “always angry” Bruce Banner (Mark Ruffalo) and other members of The Avengers try to defeat the evil Hydra agent, Baron Strucker (Thomas Kretschmann), who possesses the staff of Thor’s brother, Loki. After their mission, Stark uses a jewel in the staff to bring to life an artificial intelligence to help the world against otherworldly forces. Little does Stark know that the A.I. is a heartless entity, Ultron (A grimly fascinating James Spader) who wants to annihilate humanity.

Whedon’s verbal style is all over his movie with plenty of comedically quirky and self-deprecating exchanges between the team. The novelty of watching larger than life personas such as Iron Man, Captain America (Chris Evans), Black Widow (Scarlett Johansson) and Hawkeye (Jeremy Renner) shooting the breeze has not lost its magic.

Whedon’s biggest triumph is turning the action flick into an ensemble piece. A lesser storyteller would not have devoted enough time to everyone, but he injects just enough development from both the original crew and new characters known as The Vision (Paul Bettany), Quicksilver (Aaron Taylor-Johnson) and Scarlet Witch (Elizabeth Olsen).

For a long chunk of time, the tale unfolds in an exciting fashion with cool action set pieces as well as crowdpleasing moments. The narrative does hit some speed bumps when the group takes refuge from danger thanks to Hawkeye. When information about his private life is revealed, the scenes with him after are disappointingly cheesy.

Whedon rushes through darker implications of parallels between the snarky Stark and Ultron, to make way for a random extended fight sequence primarily featuring Black Widow.

An argument can be made that the scene is intended as a build up to the grand finale, but it pales in comparison to the other parts of the spectacle. What follows makes up for some of these issues.

As expected, the climax of “Avengers: Age of Ultron” is glorious. The last 30 minutes are thrilling, funny and even a little sad. This part of the flick is exactly what the target-audience craves in a comic book cinematic adventure.

Whedon might not have reached the heights of his breakout feature, but he still has crafted a giddy piece of popcorn entertainment.

It is sad to know that Whedon is likely leaving the world of Marvel for good, but his work at the studio will be remembered for years to come.