The Daily Aztec • May 4, 2015 • http://thedailyaztec.com/66934/entertainment/balboa-museum-hosts-emotionally-moving-multimedia-exhibit/ 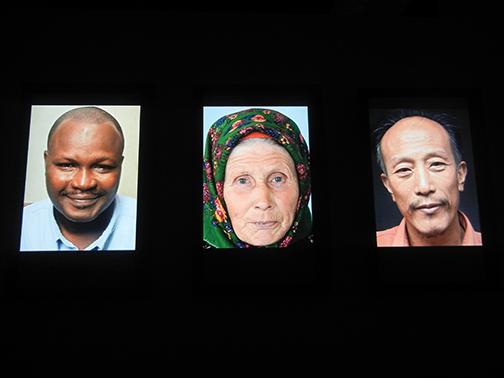 Walking into the Museum of Photographic Arts in Balboa Park, there is a video mosaic taking up 46 feet of its back wall with hundreds of people talking. They are muted but continue to move as one person’s clip appears center screen; there they share a portrait of their own story. That is 7 Billion Others.

7 Billion Others is an introspective exhibition that explores what distinguishes humans and what brings people together as a human race. It takes individuals from 84 different countries and poses 45 questions pertaining to different themes in life. More than 6,000 interviews were conducted in the span of seven years for the making of this project.

The exhibit runs from Feb.21-Sep.15 at MOPA. According to the 7 Billion Others website, “Four thematic updates occur during its installment to keep content fresh and engaging during its extended run of 30 weeks.” Meaning, the topics and questions change in cycles every two months of the exhibition.

Upon entering, there are different screening rooms to choose from that display topics and themes. Currently in April, this includes: happiness, love stories, making love last, being at home, leaving one’s country, testing times, meaning of life, mosaic, and the making of the film.

Each video presents joyous and heartbreaking realities. Most of all, they create a unifying energy in the space. As these stories expose cultural differences, they also manifested a positivity and hopelessness for those who are misunderstood and chastised.

One of the most captivating screening rooms is testing times. There, individuals share stories of abuse and violence that they experienced in their lives, and how that has shaped their current reality. There were stories ranging from a woman with an abusive father to a man who watched people who died during the bombings of Nagasaki and Hiroshima.

The exhibit ends at an installation called “Messages”. There are videos playing on 6 smaller screens with people saying what message they would like to leave for the 7 billion others in the world. Some gave advice, some said what they regret, but most of all, these videos humanized all of the individuals as they preached love and sympathy for others in good times and in bad.

When leaving, you come back to the entrance of the museum where the mosaic is located. The video mosaic serves as a metaphor to represent the purpose of the entire exhibit. It demonstrates that although there are 7 billion people in the world and life continues for all, everyone grows and everyone has experiences. They may not be similar or close but they make us feel and remind us that we are alive whether it’s rooted in love, happiness, or pain.

7 Billion Others is an important exhibition to visit, it builds social and cultural awareness but more importantly, reminds its audience members of the fragility of one’s own mortality as well as that of those around them.