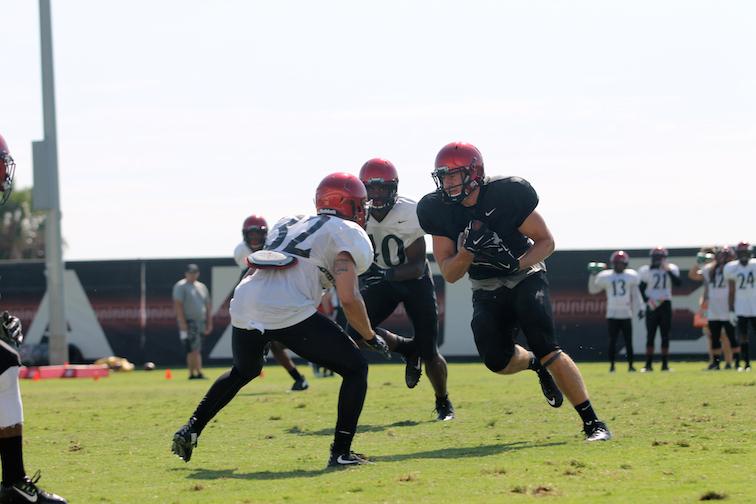 It may not be surprising that one of the more impressive players early in San Diego State football’s fall camp is a running back.

No, it’s freshman Juwan Washington from Kennedale, Texas, who routinely made defenders whiff during scrimmages Thursday.

“He’s got some quickness and natural feel for where the holes are,” head coach Rocky Long said.

One of Washington’s biggest fans is Pumphrey, who could be heard yelling “easy money” as Washington scored a touchdown during a scrimmage.

However, Long doesn’t want to over-hype the freshman just yet.

“He’s making the other freshman out there miss, so that’s good,” Long said.

“So far it feels pretty good, I’m just going out there and not trying to think about (the injury) as much,” Barrett said. “There’s a little weakness, but once I start and get off the ball I feel comfortable.”

Barret will be joined by senior Jon Sanchez, who started 13 games last season, and senior Christian Heyward, who played in 11 games last year.

“Having an experienced group is going to help us, communication will be huge this year,” Barrett said.

While the starting three lineman seem to be set in stone, Barret noted that junior transfer Kyle Kelly has impressed and could help this season.

“He gets what his job is on the line and has what it takes to play,” he said of Kelly.

One of those five is sixth-year senior cornerback J.J. Whittaker, who has a lot to give on and off the field.

“I try to be as vocal as I can and do whatever I can to help the younger guys,” Whittaker said.

Just like the secondary last year, the wide receivers enter this season as one of the younger units on the team.

Whittaker has a unique view guarding them during practice and thinks they are primed to exceed expectations.

“I think as a unit, they’re stepping up,” Whittaker said.

• Sophomore tight end Darryl Richardson sat out practice Thursday with an ankle injury that Long said he suffered earlier in the day.

• Senior offensive lineman Pearce Slater participated in team drills, but sat out the scrimmage. Long said it was a coach’s decision to keep him out.

•Junior quarterback Jake Rodrigues slipped while running out of bounds on a scramble during a scrimmage and immediately grabbed the back of his upper leg once he hit the ground. He received work from the trainers but Long did not have an update on his condition.

Kickers don’t usually command a whole lot of media coverage, but when senior Donny Hageman was set to get interviewed after practice, Long shared his surprise.