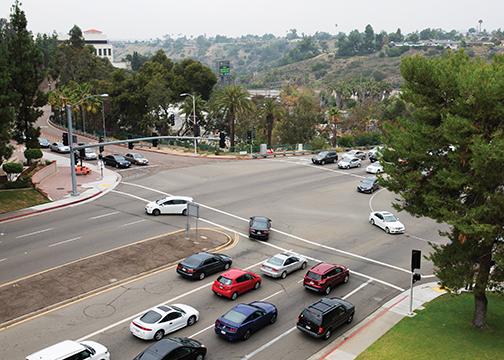 The ruling requires the university to fund infrastructure costs to alleviate traffic and congestion created by the expansion project.

If the CSU provides the necessary funding, the project could make room for 10,000 more full-time students and up to 1,300 more faculty and staff members by fall 2024. SDSU’s campus boundaries could push toward  Interstate 8 and  include a high-quality, affordable-housing development with about 348 units for faculty and staff.

A 612,000 square-foot classroom complex with an adjoining parking garage, a 120-room hotel, a 70,000 square-foot conference center, housing structures to accommodate 2,796 students, and the recently renovated Conrad Prebys Aztec Student Union are also included in the plan.

However, the plan failed to allocate funds to reduce the impact of traffic congestion on the surrounding College Area neighborhoods and Interstate 8.

An environmental impact report, a which outlines environmental factors affecting an area during a land development or construction project, must be submitted to local government before any movements are approved.

According to a brief by Deputy City Attorney Christine Leone, SDSU is required to comply with the California Environmental Quality Act.

The brief cites California’s public resources environmental code, which says the state must:

“Create and maintain conditions under which man and nature can exist in productive harmony to fulfill the social and economic requirements of present and future generations’ preservations of the environment for generations to come.”

According to Leone’s legal brief, the CSU prioritized its goals over the concerns of the community.

A segment of the final state Supreme Court ruling reads, “We expect the Board, in any new EIR, will proceed in accordance with CEQA‘s standards and procedures, including its provisions for public comment, and make all required findings in good faith and on the basis of substantial evidence.”

Leone said the final ruling showed the high court sided with the San Diego city attorney’s interpretation instead of the CSU’s claim.

“This is an important decision which treats the CSU system like any other developer,” San Diego City Attorney Jan Goldsmith said in a press release. “It must come to the table and negotiate its fair share in a way that protects the environment and protects the city’s taxpayers. I am proud that our City Attorney’s Office took the lead on this important legal issue, which has great significance in cities throughout our state.”

Some community members have objected to expanding SDSU in the College Area and felt their concerns have not been heard since the project was approved in November 2007.

Gary Campbell is chair of the College View Estate Association, which represents the neighborhood just west of SDSU.

He said the citizens’ concerns were never properly addressed.

“I think the current president tried to open up communication a lot more than some of the previous ones did, but still there is an attitude (within the CSU) that, ‘We can do whatever we want and we’ll tell you what we are doing after the decision has been made to do it, but we are not going to involve you at all in the planning of whatever we are doing,’” Campbell said.

Campbell added the university should follow the same rules as any other developer.

He said the city should not have to bear the cost of its expansion and SDSU should pay to mitigate the traffic, noise and anything that comes along with an expansion.

“Environmental mitigation is costly, and the CSU will be required to seek additional funding to meet increased enrollment needs and to cover mitigation expense,” Virjee said in a statement. “We look forward to working with state agencies and with our local communities throughout the state to meet our citizens’ needs and serve the state of California.”

Campbell is pleased the university will abide by the same rules as other developers.

“The university thought they were the big dogs and thought they could do whatever they wanted and they didn’t have to consult anyone or follow any other rules that any other developer must follow,” Campbell said. “We just think that is wrong. We are big supporters of the university, but they need to be good neighbors, and they need to follow the same rules everyone else does.”

Leone is optimistic the ruling will finally bring the neighborhood and the university to an agreement.

“I think this gives the opportunity for SDSU and the city to come together as partners to find a way to make sure that that surrounding community develops in a way that’s compliant with environmental laws and public safety,” Leone said.