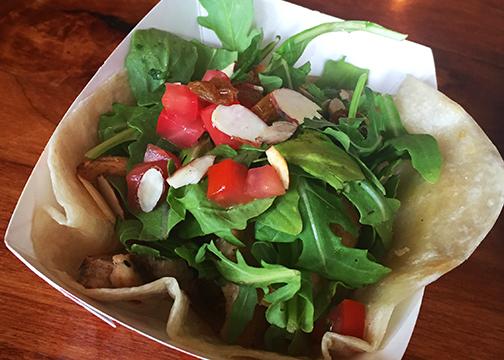 Forget any and all previous taco knowledge, because City Tacos has redefined the delicious tortilla creation. Located on University Avenue in the vibrant North Park, City Tacos provides customers with quality Mexican cuisine. These tacos, however, have a dash of Southern Californian influence that makes this taqueria outstanding.

City Tacos could be easily missed by drivers on the street, but the small location and hidden appearance contribute to the taqueria’s unique character. The interior is rustic and modern, contrary to how most taquerias appear.

The menu is simple: tacos and beer. There are 10 tacos featured, with the exception of a special on any given day. The tacos are divided into columns separating fish, meat, vegetarian and featured items. Fish and seafood tacos include the cameron — a battered shrimp taco on a house-made flour tortilla topped with grilled calabacitas, corn, green tomatillo salsa, cilantro and red onions. The tangy sauce used in the camaron taco provides a zesty flavor that compliments the entire dish masterfully.

“At City Tacos, everything is made fresh with the freshest ingredients; that allows for more flavor,” manager Carlos Ramos said.

One of the meat tacos is the borrego, which is made up of pulled lamb, wild mushrooms, cotija cheese, tomato, cilantro, fried leeks and a chipotle cream sauce.

Also be sure to try the pollo asado taco and the chorizo asado taco. The pollo asado taco, topped with grilled chicken breast, arugula, diced tomato, golden raisins and toasted almonds, definitely did not disappoint. A touch of green salsa and cilantro offered at the complimentary salsa bar gave the taco a little bit more of a kick. Adding almonds to a taco may seem strange to loyal taco connoisseurs, but the nuts added a healthy flavor in addition to bringing out the other flavors.

Without a doubt, the chorizo taco is a must-try when visiting City Tacos. The chorizo taco includes grilled pork chorizo, caramelized pineapple – that’s right, pineapple – and melted Oaxaca cheese on a house-made corn tortilla. The sweet and juicy pineapple chunks paired with the savory grilled chorizo create an unforgettable combination. Perhaps the best part about this one-of-a-kind taco is the homemade corn tortilla that holds it all together. These corn tortillas are so thick and fluffy, it almost seems impossible for the tacos to break.

All tacos featured at City Tacos are priced at an affordable $3.50. City Tacos even has a Taco Tuesday deal in which all tacos are marked down to $3 each. With tacos as delicious as these, Taco Tuesdays are not to be missed.

Almonds, pineapples, strawberries and fried rice noodles are ingredients that most people would avoid putting in a taco.

Not at City Tacos.