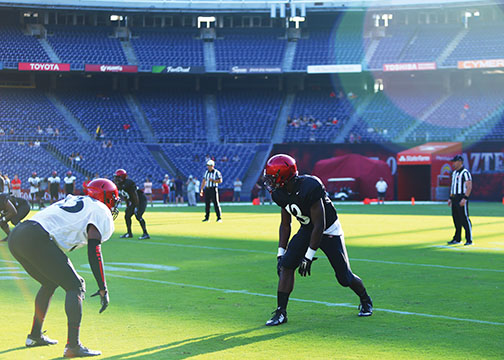 As we start this next San Diego State football season against city rivals University of San Diego full of hope as always, I can’t help but think back to my first experience at an SDSU football game last August.

As I walked down the steps to my seats, I could feel the excitement in the air inside famous Qualcomm Stadium.

I could feel the history, from Don Coryell’s years leading the Aztecs and eventually the San Diego Chargers, to Tony Gwynn destroying major- league pitching for the San Diego Padres, and Marshall Faulk running rampant for SDSU in the early 1990s

But I could also feel the shaking of the old, rickety lower-level stands. The cold, hard, unwelcoming seats made my halftime exit from the game more likely with each passing moment.

It took only a couple of minutes inside Qualcomm, with its prehistoric scoreboards and bleachers in need of retrofitting, to see why the Padres rushed out of there to Petco Park when they got the chance and why the Chargers would consider sharing a stadium with the Oakland Raiders.

The second-oldest active National Football League stadium has a lot to offer, but comfort is not one of those things.

It has nothing to offer to this generation of fans or anyone who wasn’t there to witness the greatness on display all those years ago at Qualcomm.

It’s time for the new crop of athletes and fans in San Diego to have a modern, upgraded home.

Qualcomm Stadium, originally named San Diego Stadium, opened on Aug. 20, 1967. It has housed the Chargers and the SDSU football team since its inception.

For some perspective, 1967 was the same year The Beatles released Sgt. Pepper’s Lonely Hearts Club Band, a postage stamp cost 5 cents and PBS was launched.

Jack Murphy, a sports writer for the San Diego Union who convinced the Chargers to move to San Diego from Los Angeles and spearheaded the campaign to build the stadium, passed away in 1980.

Out of respect, the stadium was renamed Jack Murphy Stadium until 1997 when technology company Qualcomm funded a major renovation project and gained the naming rights, which expire in 2017.

Hopefully that expiration will finally be the motivation the city needs to build a new stadium.

Ideally, a new stadium would be one fitted with proper shading, comfortable seating, a far better fan expereince and a team that can contend for national championships.

The only thing Qualcomm Stadium has going for it is the history it holds. So many great athletes, such as Faulk, Gwynn, LaDanian Tomlinson and the late Junior Seau are just some of the legends who have walked its halls and played on its field.

But even back then, this concrete eyesore was a dump.

Looking at all the gorgeous state-of-the-art stadiums at other colleges, like Beaver Stadium at Penn State and even the ancient Rose Bowl, should make Aztec fans jealous.

Granted, the Aztecs haven’t recently been the high-caliber football team to even deserve a stadium like Baylor University’s McClane Stadium, but we live in one of the most beautiful places in the U.S.

We need a piece of art. Something that better represents the school that was just ranked by Forbes as the No. 5 college in America in the second annual #MyTopCollege contest.