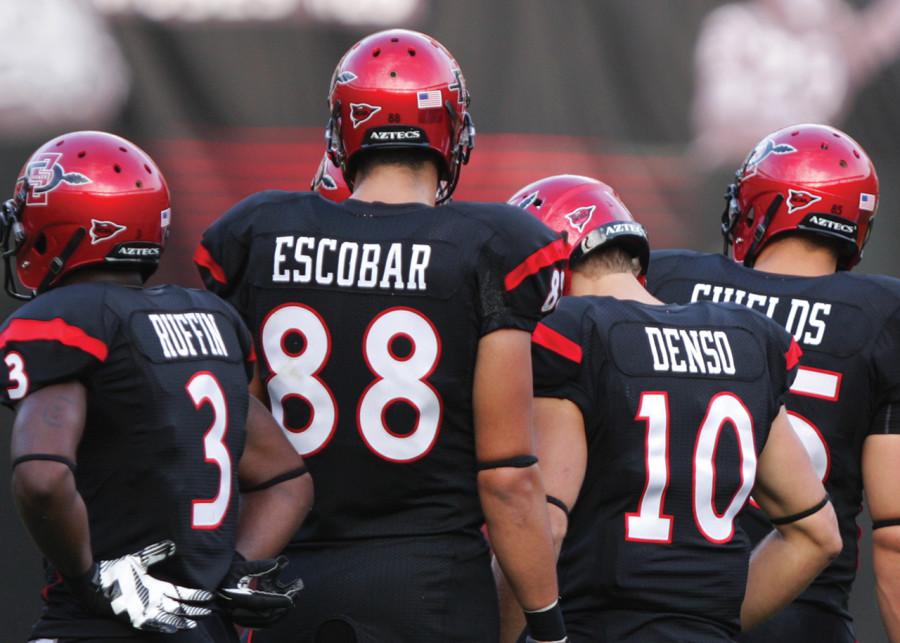 Each year, each NFL team tries to build for the future in the draft. Many former San Diego State football players have been apart of those plans.

Running back Marshall Faulk might be the biggest name to come through SDSU, making his mark with the St. Louis Rams in the late 1990s and early 2000s.

There are plenty of other players who have made their way to the pro ranks from SDSU.

Here’s a few of the more recent ones.

Escobar was one of the top tight end prospects in the 2013 NFL Draft, declaring after his junior season at SDSU.

In 39 games as an Aztec, Escobar hauled in 122 catches for 1,646 yards and 17 touchdowns. He was named first-team All Mountain West each of his last two years.

Escobar found a buyer in the Dallas Cowboys, who took him with the 47th overall pick in the second round.

He was initially projected as a fourth-rounder. But he hasn’t been a huge part of the offense in Dallas, sitting behind Jason Witten. Last year, Escobar caught nine passes for 105 yards.

He was a good redzone threat for Tony Romo, hauling in four touchdowns to bring his career total to six.

Ruffin was one of the best offensive weapons during his three seasons with SDSU.

His top season was 2013 when, as a sophomore, Ruffin had 68 receptions for 1,136 yards and three touchdowns.

While limited by a broken collarbone his senior year, Ruffin entered the 2014 NFL Draft with high hopes.

He went undrafted, but signed with the Indianapolis Colts as a free agent on May 5, 2015.

He was released, however, after the Colts’ third preseason game. He is currently searching for an NFL home.

Pinkins declared for the NFL Draft in 2014 after a career at SDSU where he played the key role of Warrior, or free safety.

Pinkins was picked up by the Super Bowl champion Seattle Seahawks with the 208th pick in the sixth round.

Seattle tried to play Pinkins at cornerback, but after he injured his foot and missed the whole 2014 season, the Seahawks decided to switch him to outside linebacker.

He showed a lot of promise in 2015 training activities and minicamps, and he is working toward a roster spot.

O’Connell was one of the greatest dual-threat quarterbacks to don the SDSU uniform. He holds the school record for rushing yards for a quarterback with 906.

He was drafted by the New England Patriots in the third round of the 2008 NFL draft. O’Connell found very little playing time, totalling only 23 career yards on six passing attempts in New England.

He bounced around the NFL as a player for the Detroit Lions, New York Jets, Miami Dolphins and San Diego Chargers after his Patriot days ended.

In January 2015, O’Connell was hired as the Cleveland Browns quarterbacks coach, giving him the task of coaching Johnny Manziel.

Berhe earned all-Mountain West honors twice as a safety for the Aztecs. After his senior season, Berhe entered the 2014 NFL Draft with lofty hopes.

He was taken by the New York Giants with the 152nd overall pick in the fifth round. As a rookie in 2014, Berhe played in all 16 games, contributing mainly on special teams.

He totaled 14 tackles and one fumble recovery in the season, but logged valuable playing time.

On Aug. 28, Berhe announced on his Twitter account that he was going to have season-ending surgery to “remove a hardened blood clot.”