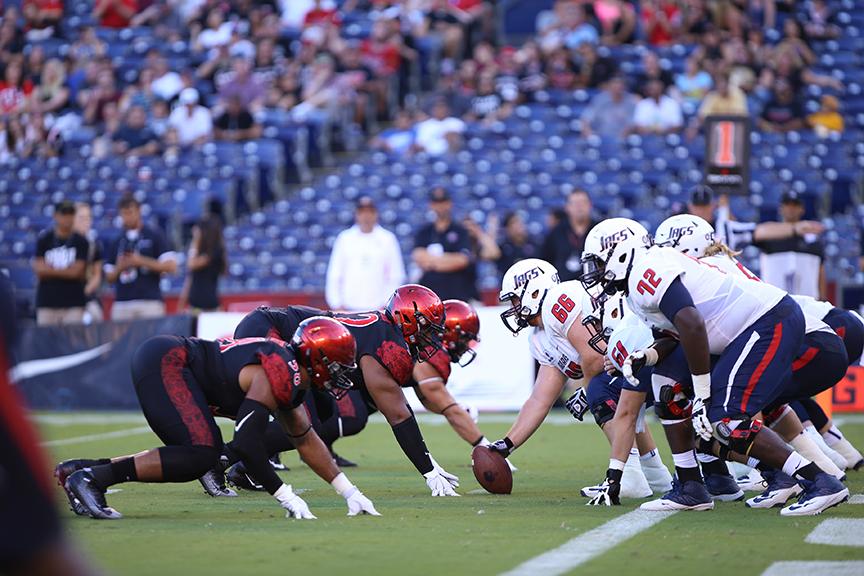 Two’s a coincidence, three’s a trend and four consecutive losses may mean the end of the Rocky Long era at San Diego State.

Going into the road contest against the Penn State Nittany Lions, Long faced much media scrutiny for his team’s disappointing loss to University of South Alabama.

And in a mistake-ridden tussle at Beaver Stadium, the Aztecs (1-3, 0-0 Mountain West) couldn’t match up to their second Power Five opponent this season, suffering a 37-21 loss.

The game highlighted  multitude of blemishes that dot SDSU’s face.

Whether the problem lies with Long, senior starting quarterback Maxwell Smith, the offensive line, the play-calling or all of the above (don’t worry, this isn’t a multiple choice test), there has to be a change.

To earn its sixth consecutive bowl appearance, SDSU will have to sprint to the finish with at least a 6-2 record in conference.

Based on recent history, the Aztecs should be primed to do so.

Long’s Aztecs have been notoriously slow starters, beginning each season since 2012 with a 2-3 record, only to bounce back once MW play starts.

Early season woes have become the sad norm for SDSU.

The spectacular way in which SDSU is losing this year is where the real problem lies.

The final, and by far most embarrassing, was the strip of Smith and subsequent 71-yard return by 323-pound junior defensive tackle Austin Johnson, who found a way to outrun the entire SDSU offense en route to the end zone.

That was the exclamation point on an ugly day for Smith, who went 10-for-29 with 141 yards and one touchdown.

It was also the closing act for the Aztecs.

SDSU has turned into Santa Claus right before halftime this season, rushing to leave possessions under the tree like presents to its opponents before the sun rises on Christmas morning.

Against UC Berkeley, it was in the form of an interception by second-string freshman quarterback Christian Chapman.

For South Alabama, it was a fumble by senior running back Chase Price.

And against Penn State, SDSU left two gifts under the tree.

The first was a muffed punt by junior wide receiver Lloyd Mills, a special teams star in the team’s loss to South Alabama, which gave the ball and momentum back to Penn State with 2:33 left in the first half.

The Nittany Lions responded with a quick score, taking the lead from SDSU 14-13.

The second was on the very next SDSU offensive snap, when junior running back Donnel Pumphrey fumbled on a run up the middle and Penn State recovered again.

The Aztecs took a one-point lead and with a snap of their butterfingers made it a 13-point deficit.

“I can’t explain it,” Long said after the loss. “There’s no way to explain it. I don’t think I’ve been through it before, where three weeks in a row we blow up right before halftime.”

Again, two’s a coincidence, but three’s a trend.

Losing to Penn State isn’t a shock to anyone. The Nittany Lions are bigger, stronger and more composed than the Aztecs.

It’s that SDSU continues this trend of imploding at the worst possible time, and in the ugliest of fashions, that continues to make this season a tough one to watch.