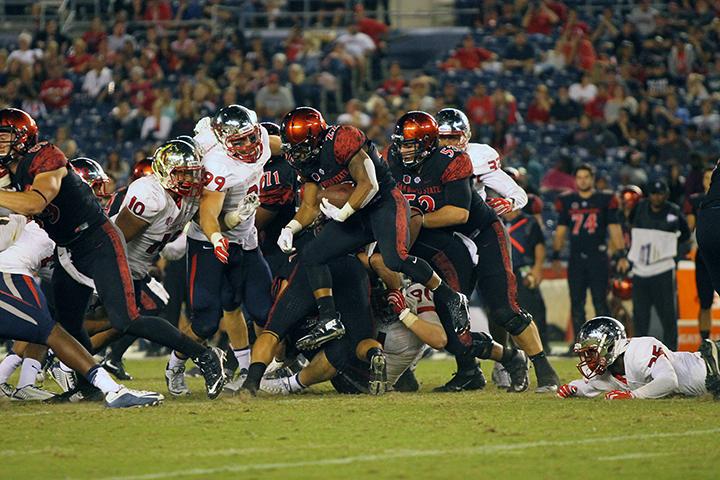 It took five games, three losses and one Old Oil Can, but junior running back Donnel Pumphrey and his San Diego State offense finally found success.

Pumphrey looked back to old form, rushing 23 times for 124 yards and a touchdown, his highest total of the year by a large margin.

It was clear early in SDSU’s 21-7 win against Fresno State that SDSU’s offense was going to be centered around its prized pony, Pumphrey. Just as it was last week, and the week before and every week since the beginning of the 2014 season.

Until he went down with an ankle injury in the third quarter.

However unfortunate this was, it had to be expected as the Aztecs have been leaning on him too much for too long.

He’s a small man, standing at only 5-foot-9, 180 pounds, and eventually the weight of an entire offense was going to do serious damage.

On the first drive alone Pumphrey had seven carries totaling 69 yards, capped off by his 33-yard scamper into the end zone.

He accrued more on this drive than in the two prior complete games.

On his 23rd run of the game, Pumphrey gave the Aztecs a first down, and hobbled off of the field with help from the training staff and his teammates before being escorted to the locker room, his left foot bare.

The worst fear of all the SDSU football community was coming to fruition.

But, almost symbolically, on the very next play sophomore running back Rashaad Penny snuck out of the backfield and caught a 33-yard play-action pass for a touchdown from graduate transfer quarterback Maxwell Smith.

Penny, third in the SDSU stable of backs, once again proved himself to be a racehorse, exploding for a 17-yard inside handoff on third and 12 in addition to his touchdown reception.

It was the most involved Penny has been in the offense this season, and fans should only expect his role to grow significantly from this point forward to compensate for the loss of the Aztecs’ thoroughbred.

“Everything that he’s done has been on the perimeter. There might be a reason for that,” head coach Rocky Long said of Penny’s involvement in the offense. “He’s all right between the tackles and I’m sure that his part in the game plan will increase dramatically.”

Senior running back Chase Price picked up the slack on the ground, running 27 times for 151 yards, both career highs, almost exclusively in the second half.

This was not a new occurrence, as Price has shown in the opportunities he has been given that he is also very capable of dominating a game.

“He’s a good running back in his own right,” Long said of Price. “Probably not quite as fast as Pumphrey, but he does some other things maybe even a little bit better.”

Part of the dependency that SDSU has on Pumphrey stems from the inability of Smith to find consistent success.

Even in a limited passing offense — only an 8.7 average yardage attempt with two passing touchdowns of 33 and 44 yards — Smith struggled to find receivers, completing five passes on 12 attempts

Smith was still optimistic and happy with his team’s game and wore a smile in the postgame presser brighter than even the Old Oil Can trophy after the 21-7 victory over the Bulldogs.

“It felt good to get back to Aztec football, to ground and pound and make them feel it,” Smith said. “They definitely felt it.”

It’s sad that it had to come to this, but maybe it took the Pumphrey injury to make the coaching staff recognize that they have two high-end running backs who have been rearing to get onto the field all season.