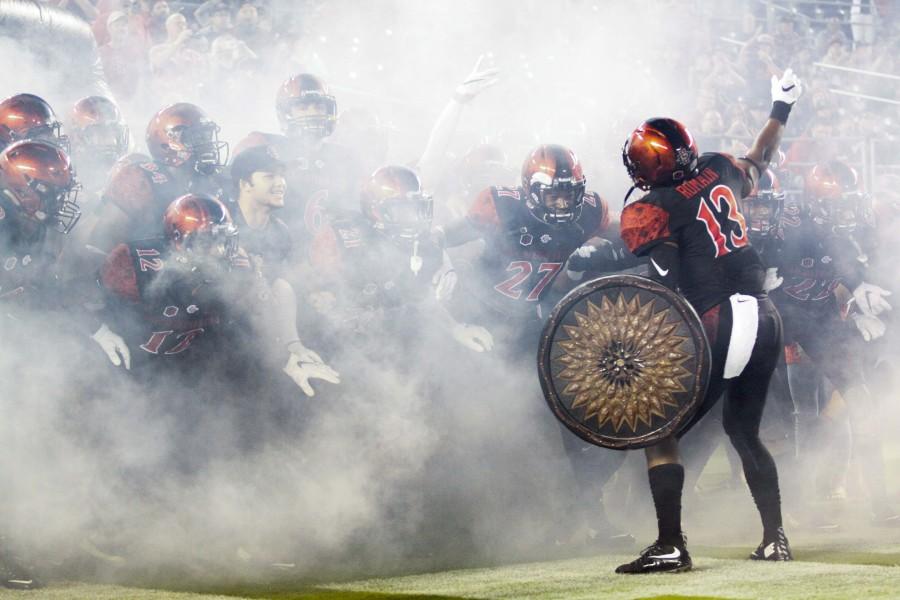 San Diego State football (2-3, 1-0 Mountain West) is experiencing déjà vu as it heads to Honolulu to take on the University of Hawaii (2-3, 0-1 MW) this Saturday.

It was just last season that the Aztecs entered their game against the Rainbow Warriors looking for their first back-to-back wins while also coming off their best defensive performance in terms of yards allowed a week prior.

“Physically, talent-wise, these two teams are as equal as they can be,” SDSU head coach Rocky Long said. “The unique thing is travelling to Hawaii to play there.“

When SDSU — and any opponent, for that matter — travels to play in Hawaii, it not only has to prepare for the game, but prepare for the time change, as well. It’s no surprise, then, that the Warriors are 2-0 at home this season, including a win over the Pac 12’s University of Colorado.

“There are several advantages they have when they play at home,” Long said. “I mean you’re losing time and the game starts at 9 o’ clock your time. I don’t know how many people are used to playing at midnight. That is usually around the fourth quarter when it gets critical.”

However, in its first game later than 5 p.m. Pacific Standard Time, SDSU had no problem taming the Fresno State Bulldogs, who only managed 89 total yards and saw nine of their 13 possessions end in three-and-outs.

Offensively, the Aztecs’ running game was finally able to stretch its legs all the way to 305 yards. Senior running back Chase Price led the team with 151 yards on 5.6 yards per run. Junior running back Donnel Pumphrey, who will most likey be sidelined this week due to a high ankle sprain suffered against Fresno State, exploded for 129 yards and scored the lone SDSU rushing touchdown of the game.

While the Aztecs try to build off last week’s success, the Warriors are better off forgetting they played a game a week ago, when they lost 55-0 to Boise State on the road.

With a balanced attack the Broncos tallied 554 yards and held the ball for over 37 minutes. Meanwhile the Hawaii offense mustered just 170 yards and committed four turnovers.

But, again, that was on the road and for the Rainbow Warriors there is no place like home.

“They play really well at home,” Long said. “They average almost 37 or 38 points a game at home. They play much better defense at home.”

The Hawaii offense epitomizes Dr. Jekyll and Mr. Hyde. Led by senior quarterback Max Wittek, this offense has been shutout in all three road games — outscored 121-0 — but it averages 37.5 points per game at home.

“Their offense is kind of similar to Fresno’s,” senior defensive lineman Jon Sanchez said. “They want to spread it out. They still want to play physical up front but I don’t think it as ‘smash-mouth’ as it has been in the past.”

Playing with spread offense that looks to strike quickly forces the Hawaii defense to come up with lots of stops, which will be hard against a team with great success running the ball.

Even with Pumphrey out, Price and sophomore running back Rashaad Penny have shown they can pick up the slack. On 47 less carries, Price and Penny have combined to match Pumphrey’s 429 rushing yards.

Surprisingly, Pumphrey’s absence may hurt the most in the passing game, as he leads the team with 14 catches. But if Price and Penny can keep the running game on schedule, graduate transfer quarterback Maxwell Smith has shown he can make the crucial throws when it matters.