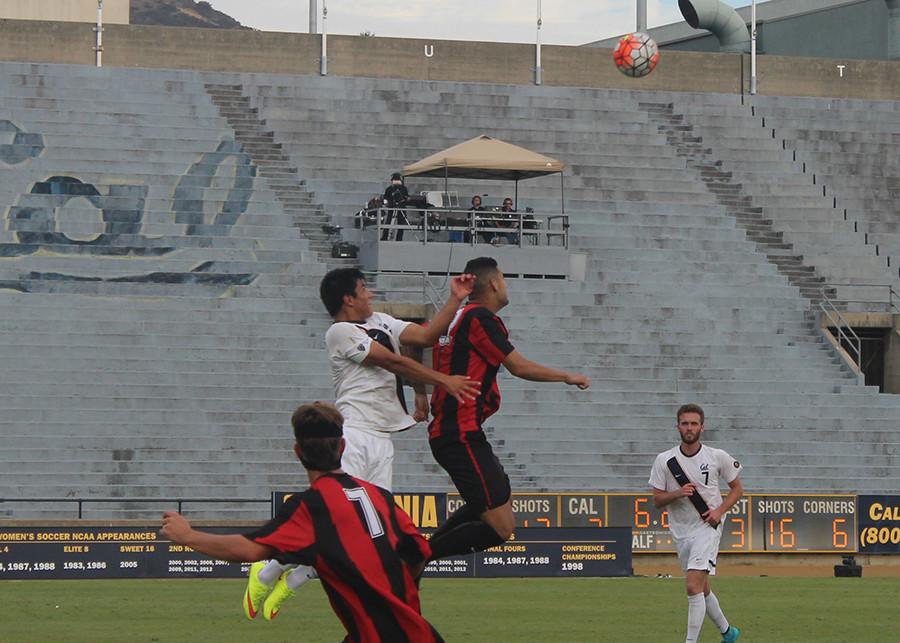 Despite its vigorous efforts in the second half, San Diego State men’s soccer fell to UC Berkeley 4-3 in double overtime at Edwards Stadium on Friday.

After falling to the Aztecs last Friday 1-0, the Bears proved their determination to get up on the scoreboard within the first minute of the match.

Cal junior forward Christian Thierjung picked up a loose ball inside the box and sent it past redshirt-sophomore goalkeeper Adam Allmaras’ reach into the left side of the net to take a 1-0 lead.

SDSU responded shortly after in the 13th minute in a stressful attempt to score. Redshirt-sophomore midfielder Dallin Cutler shot toward the center of the net, but Cal freshman goalkeeper Jonathan Klinsmann headed it out.

His header was received by junior midfielder Casey Macias, who then struck the ball from 11 yards out. Klinsmann blocked the ball, driving it directly to redshirt-senior forward Rene Reyes, who put it into the left of the net to tie the game 1-1.

The Bears continued to dominate and the Aztecs’ defensive line loosened up.

In the 26th minute, Cal freshman forward Spencer Held received the ball from slightly outside the box and kicked it into the hands of Allmaras. Allmaras’ block drifted the ball into the feet of Thierjung, who then struck the ball into the net to increase the Bears’ lead to 3-1. 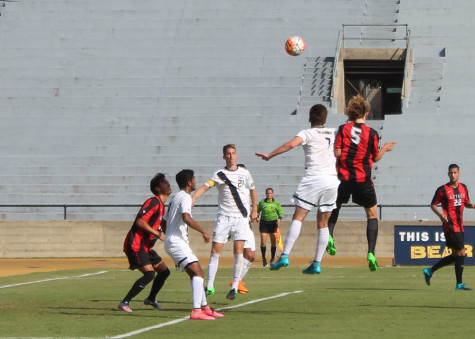 SDSU’s next opportunity to score came in the 35th minute when Cutler drew a foul inside the box. Cutler took the penalty kick and shot the ball toward the right of the net, but Klinsmann dived and blocked it.

Cal outshot SDSU 11-9 in the first half.

“We just didn’t have the proper energy in the first half,” head coach Lev Kirshner said. “The spacial awareness wasn’t good enough. Between us not giving pressure, allowing those runs to have the timing and not knowing where those runs were coming from caused us some trouble in the defensive side.”

The Aztecs’ poor performance in the first half motivated them to turn the game around in the second half in an attempt to tie.

In the 53rd minute, SDSU was able to score off an own goal to make the score 3-2. Sophomore forward Jeroen Meefout received the ball from redshirt-freshman defender Aleks Berkolds in close range of the net. Meefout attempted to shoot the ball, but it bounced off of Cal sophomore defender Ugo Rebecchini and past Klinsmann into the net.

SDSU continued to pressure in a hurry to tie.

Redshirt-junior defender Travis Nicklaw controlled and shot the ball 25 yards out. The ball curved and smashed into the upper right side of the net to tie the match 3-3.

The first period of overtime was a back-and-forth battle between defenses.

Five minutes into the second period of overtime, Cal sophomore midfielder Jose Carrera-Garcia passed the ball to Thierjung, who sneaked past the backline. Thierjung shot the ball past Allmaras and into the right side of the net for his third goal of the day and secured the Bears’ 4-3 victory.

Despite its loss, SDSU’s efforts were noticed as it outshot Berkeley 7-1 in the second half and 18-16 overall.

“We really stepped up in the second half,” Kirshner said. “I’ve got a great team that’s driven and who is looking to appease the coaching staff. I can’t be more proud of their effort to come back a first half like that and completely take over the game against an excellent team.”

SDSU will stay in the Bay Area for one more match against No. 3/2 Stanford University on Sunday at 7 p.m.