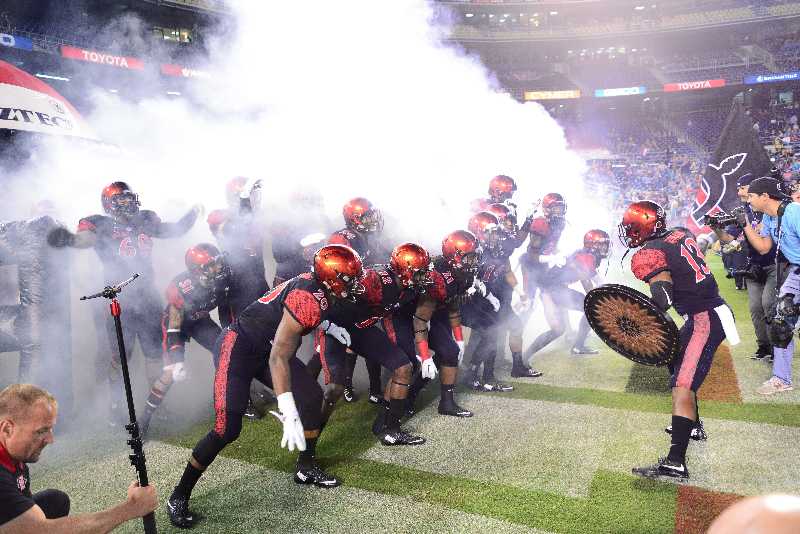 Another week meant another dominating victory, as San Diego State football overcame an uncharacteristically slow start at Hughes Stadium in a 41-17 pounding of Colorado State.

The win, the Aztecs’ fifth in October, continues their unparalleled start in conference play, as it gave them their first ever 5-0 start to conference play since 1969, when they became a Division I team.

That was not the only piece of history that this SDSU team made on Saturday afternoon in Fort Collins.

With one more win, which it has a solid chance to gain against lowly University of Wyoming, the Aztecs will clinch the Western Division of the Mountain West.

SDSU was essentially bullied by the Colorado State front lines in the first half, but the win still showed the miles that separate the Aztecs from the rest of the conference.

Much unlike its previous four games, SDSU allowed the Rams to reach the end zone as the last second of the first quarter fell off of the clock, evening the score at 7-7.

Since they started conference play, the Aztecs had never trailed.  Not only had they won every conference game (by at least 14 points), but they have not given their opponents even a sliver of hope.

But as Colorado State was driving in SDSU territory at the end of the first half, it appeared the Rams would steal the lead and SDSU’s unblemished mark.

Once again a turnover would ignite the Aztecs, as an interception by junior defensive back Kameron Kelly gave them new life, and resulted in a 54-yard field goal by trustworthy senior kicker Donny Hageman, tying his career high.

This momentum carried into the second half, as SDSU converted each of its first four second-half possessions into touchdowns, resulting in its second consecutive 40-point performance.

“I think going into halftime with momentum really helps,” head coach Rocky Long said after the game. “Especially since I thought they did a better job than we did playing physically.”

That should send a message coming from Long, who has instilled a mentality of winning with physicality.

“We just had to be more physical from the point of attack,” Pumphrey said. “And in the second half they came out doing that, and our defense was fired up, as well.”

The Aztecs heard Long’s message, as the offensive and defensive lines pushed around Colorado State like their little brother in the second half.

Pumphrey, who moved into second on SDSU’s all-time rushing list with 3,650 career yards, scampered for 121 yards and two touchdowns, and added two receptions for 47 yards and a score.

Pumphrey accounted for all three end zone visits on the day, continuing his own dominance over MW defenses, who have seen the back run for 100 yards five straight games. That has led Pumphrey to his second straight 1,000-yard season.

Pumphrey has led the Aztec rushing attack to five straight 20o-yard rushing games, which has historically been a signal of victory for Long’s teams, who have gone 26-2 when surpassing 200 yards on the ground.

If not already obvious, five straight 200-yard games is a significant accomplishment.

It becomes even more impressive when one considers how SDSU has allowed an average of only 107 rushing yards per game, the 12th best in the Football Bowl Subdivision.

The game against Colorado State was the first in which the opposition has surpassed 150 rushing yards since conference play began.

With all the notable stats that the Aztecs have been putting up, it can be easy to get lost in the numbers.

But it shouldn’t take pages of stats to see what SDSU has been doing on the field.

To put it simply, SDSU is performing at a level that none of the other MW teams have even come close to. Even Boise State, the darling of the MW.