SDSU School of Theatre’s latest production journeys “Into the Woods” 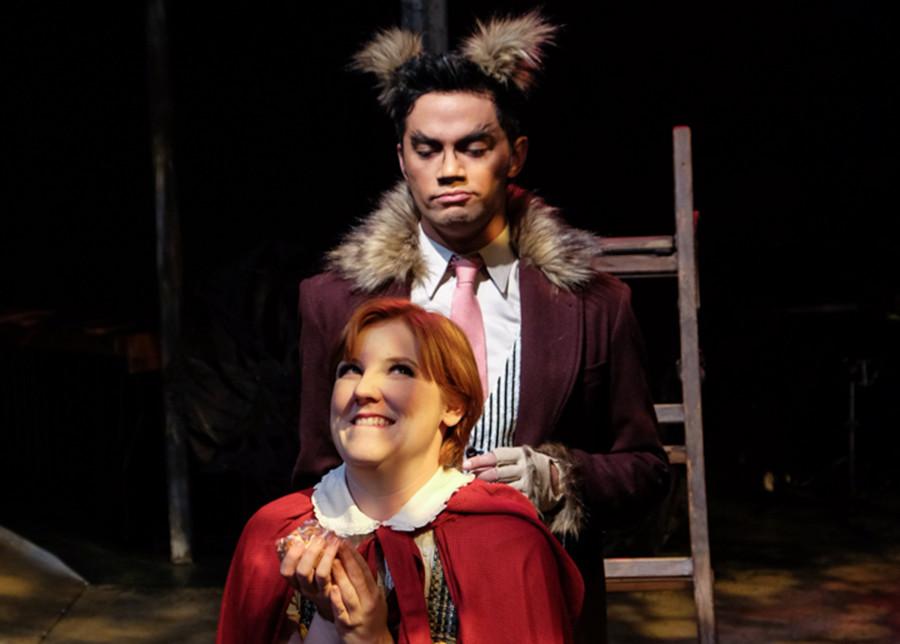 A magical story of witches, giants and hungry wolves cast a spell on San Diego State on Thursday, Oct. 30 with the debut performance of “Into the Woods” by the School of Theatre, Television and Film. Directed by Paula Kalustian, the performance was a charming and comical treat for those with a love of theater and fairytale classics.

In this re-imagined tale, an assortment of beloved storybook characters are tied together by an original story involving a childless baker and his wife on their quest to create a family of their own. The couple’s interaction with a sinister witch, who has placed a curse on them, leads them on a journey into the woods to find the ingredients that will reverse the spell: a cow as white as milk, hair as yellow as corn, a cape as red as blood and a slipper as pure as gold. During their voyage, the couple meets the young and lonely Cinderella, vicious and naive Little Red Riding Hood, sheltered Rapunzel and giant-slaying Jack, each on their quest to fulfill a wish as well.

Other notable characters include the two not-so-charming and rather dim princes, a seductively starving wolf and a set of snobbish stepsisters. The entire musical is narrated by a mysterious and witty man known only as Narrator.

Through the lovely, organized chaos of musical numbers and scene changes, the cast of talented students provided an immersive environment for the audience to see.

Each actor flawlessly embraced his or her character, no matter how wacky. From the boyish Jack, played by sophomore Dallas Perry, to the elderly Granny of Little Red Riding Hood, played by Audrey Pennington, the actors gave a convincing performance of their respective characters’ age.

However, the most important character in the musical was the set. Decorated with a creative use of tarnished and shambled umbrellas, the entire theater felt as if it was set in an eerie forest.

“I have never seen ‘Into the Woods’ in such a small setting, and I felt like I was in the show,” theater performance junior Emma Faulkner said.

The production’s use of props redefined creativity. Used as a central prop, ladders doubled as trees, towers and even horses. The simple mechanics and stringing of lights allowed for subtle moods changes that greatly impacted the overall performance. The set magically came alive.

“I’ve heard so much about this musical, and I think this production has done a great job and has lived up to the hype,” freshman Chance Page said.