SDSU’s Zylan Cheatham excited to bring energy to the Aztecs 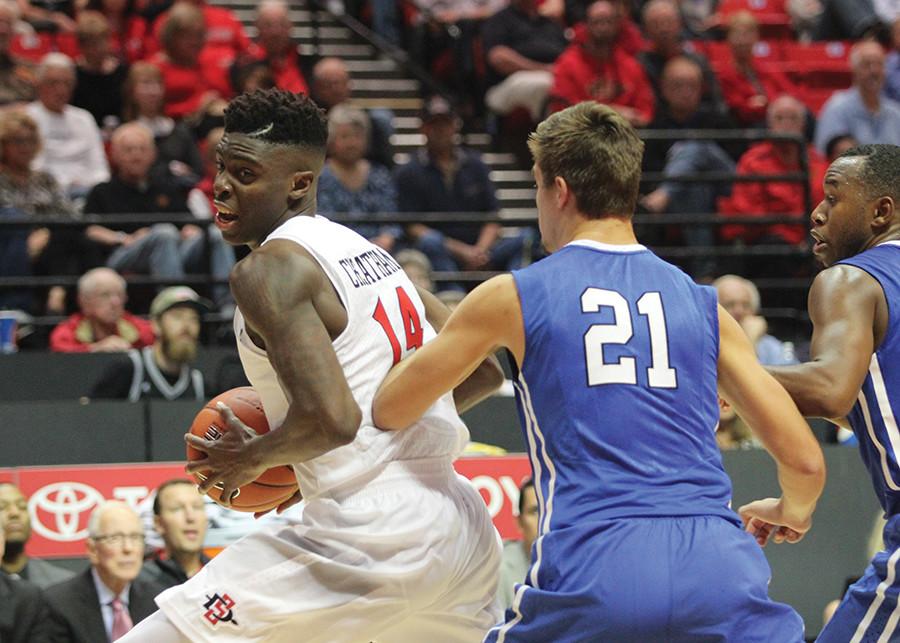 Energy is a precious commodity in basketball.

It can overcome any deficiency, elevating teams to achieve more than they should.

It is an essential element of any champion.

It is no coincidence once Steve Fisher took the reins of San Diego State men’s basketball the recruitment and utilization of high-energy players meant championships were no longer a pipe dream atop the Mesa.

Regardless of how obscure or immeasurable energy is on the basketball court, redshirt-freshman forward Zylan Cheatham hopes to leave little doubt of what it means to be an energy player once he steps onto the hardwood.

Fisher and associate head coach Brian Dutcher marvel at the 6-foot-8 forward’s energy simply from watching him in practice.

His relentless motor has also earned him the admiration of his teammates and with it the nicknames “The Animal” and the “Junkyard Dog” from the training staff.

With the high energy that Cheatham regularly has, motivation is rarely necessary.

This doesn’t mean he doesn’t have something driving him.

Due to a lack of urgency by the NCAA to clear his high school paperwork to enroll in summer classes entering his freshman year at SDSU, he was unable to receive medical coverage from the university.

This led to what would later be discovered as a stress fracture in his left foot that went unchecked until he enrolled in classes in late August 2014.

He would have surgery on the foot in early September of that year, but was sidelined for four months until it was announced he would redshirt the season in January.

That time away from the game, although punishing for Cheatham, was beneficial to his growth at the same time.

“It was difficult obviously not being able to go to war with my team and provide them with my God-given abilities,” he said. “It was hard at first, but it was all in God’s plan. I feel like I got a good opportunity to learn a lot.

“It definitely gave me an advantage in what to expect as opposed to a freshman, who is coming fresh out of high school who hasn’t experienced (college).”

The inability to participate in any basketball activities during his rehabilitation would have another effect on the Phoenix native, one that most people do not face until they lose the very thing they love.

“It completely rekindled my flame for the game,” Cheatham said. “I recall some practices in high school where I just didn’t feel like playing or a game where I just went through the motions.

“But now that I know how it feels to not be able to go to the gym to shoot around when you want to, I feel like my passion for the game is completely rekindled. I want to bring that into the season.”

For an Aztec team that lost the leadership and talents of forwards Dwayne Polee II and JJ O’Brien and the energy of guard Aqeel Quinn to graduation, it is important for Cheatham to bring his revitalized passion to the lineup.

His fire, however, is not blinding him from his primary role as the team’s energizer.

“I feel like it’s almost mandatory for me,” Cheatham said. “I feel bringing energy to my team and being that vocal leader is my job. I want to be that guy to set the tone by diving for a loose ball or sacrificing my body diving out of bounds to keep an extra possession.”