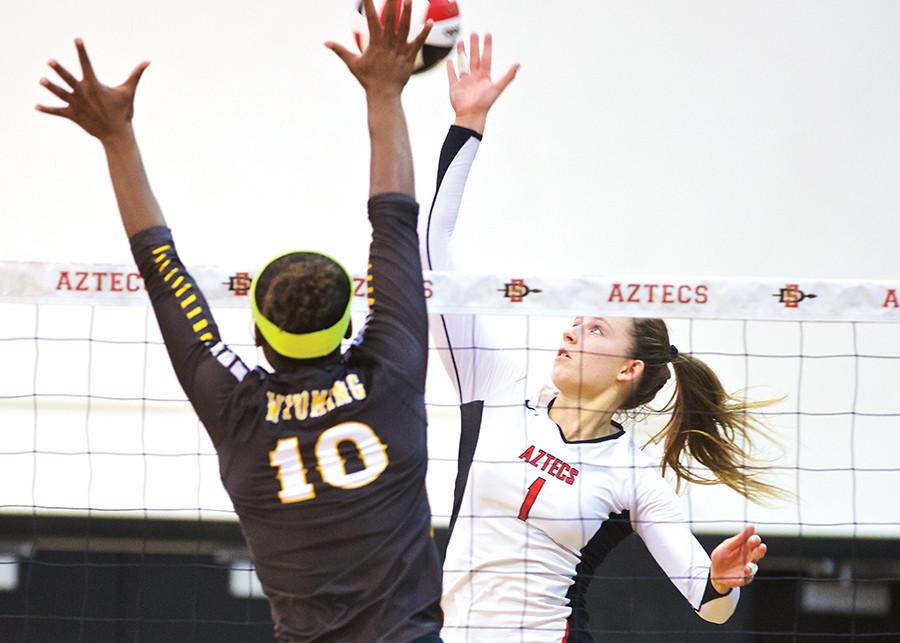 Alexandra Psoma rises on the day that will mark the beginning of a new journey and boards the plane that will take her across the Atlantic Ocean.

This 16-hour flight goes from Greece to San Diego State, where she has chosen to attend college.

A vast array of emotions flows through her as she steps foot into her new home: happiness and excitement with a tinge of homesickness and anxiety.

Psoma is a freshman on the SDSU volleyball team.

Her hometown is Athens, Greece, where she was a member of the Greek national team at both the junior and senior levels.

As a member of the Greek national youth team, she competed at the European Youth Championships in 2013 in Montenegro and placed fifth.

Psoma also played at the U19 European Championships in Estonia in August 2014 where her team placed fourth.

And all of this done before the age of 18.

On the SDSU volleyball team, Psoma’s teammates, coaches and trainers have grown to become a second family to her.

“I love all the girls and they are really helping me here,” she said. “Anything I need, I can ask coach or any girl on the team and they help me every time.”

SDSU head coach Deitre Collins-Parker was impressed with her when she first saw her in action.

She was put into contact with Psoma through an unexpected acquaintance.

“I had put my feelers out for a Greek player because I had gone to recruit at the European Youth National Championships,” she said.

“Actually a teammate of hers was an American that had played in our conference, so she emailed me and a few other schools Alex was interested in and asked if we would be interested. And I had seen her play so of course I was very interested.”

Psoma is third on the team with 169 kills and she averages 2.45 kills per set, which is highest on the team.

She has also contributed 82 digs and 23 blocks throughout the season.

But Psoma’s impact for the Aztecs goes beyond stats.

“I think she’s just got a fun personality,” Collins-Parker said. “It’s always interesting to bring in somebody new and different, so the girls are starting a new culture.”

Life in America has been different from what Psoma is used to at home.

One of her biggest challenges has been adapting to her academic environment.

With time to adjust, she has been enjoying her time here on the other side of the Atlantic.

“The food is different and the area is much smaller than America,” she said. “Everything is big here, like the cars are bigger, the roads are bigger. It’s hard, with the language and everything, trying to understand class. And keeping up with class when we are traveling with the team is tough. I miss Greece, but I like it here.”

While she’s adjusting to life in the U.S., her knowledge of the game has carried over immediately.

“Her volleyball IQ is very strong,” Collins-Parker said. “Just seeing her settle in to being the volleyball player that we knew she was capable of being has been fun. I think there was an adjustment phase when she first got here, but we’ve seen her play some really great games.”

Psoma looks forward to returning to Greece over the winter break and also in the summer to play on the Greek national team again. To an outsider, her hectic schedule of nonstop volleyball may seem excessive or overwhelming.

But she wouldn’t have it any other way.

When she finishes school, she wants to go back to Europe and play in a European league.

“I like the competition we have on the court and the feelings you get if you lose or if you win,” she said. “I like that those feelings going up and down. I love playing volleyball and being a team. I’ll play until I can’t anymore.”

For Psoma, volleyball has been so much more than just a game.

It has allowed her to see the world, meet people she wouldn’t have met otherwise and play for the Aztecs.