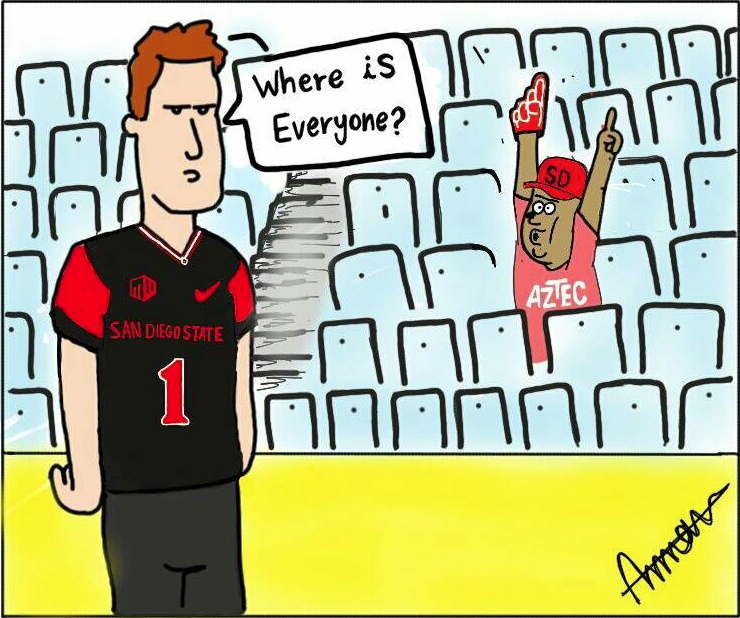 While Aztec football has had its ups and downs this season, one thing has remained consistent: a lack of attendance in Qualcomm Stadium.

Despite riding a five-game winning streak, San Diego State struggles to give away student tickets, let alone sell them to the public.

In order to begin to examine why SDSU has such a difficult time getting butts in seats, students around campus were asked a simple question: “Why don’t you go to Aztec football games?”

Their responses are below.

“I love watching college football — even more so than professional. I’ve attended football games in the Pac-12, Big-10 and SEC conferences, and there’s so much more life surrounding their football games.

Here at SDSU, it’s not like that whatsoever. Football is barely talked about among students like it is at other Division 1 schools.

Because football isn’t hyped here, I don’t get into it. On Saturdays, I’d rather hang out at my place with a couple of friends and watch a good game on TV rather than go all the way to Qualcomm to see the Aztecs struggle to win.”

“I don’t go to the football games because the stadium is off campus. Qualcomm is also so big that it makes the crowd feel disconnected from the games.”

“I usually don’t go to the games because I’m too hungover to want to get on the trolley.”

“Actually going to the game is such a commitment. Why would I go watch a single game when I can watch all of them at my house? I stay home so I can flip between all of the different games.”

“I don’t go to the games because the stadium is too far away. I also don’t really understand football, and nobody is ever really excited to go watch the team play.”

“Before I came to campus, I thought I was going to go to every home game. Unfortunately, once I got here, I realized that going to games just wasn’t very fun. My friends never get excited about going because the team isn’t very exciting. I think it would be different if there were a stadium on campus.”

“Honestly, the draw for me to go to Qualcomm is more about tailgating with my friends than it is to watch football. By the time the tailgate is over, I’m ready to go back to campus.”

“The atmosphere inside Qualcomm stadium just does not compare to other Division I schools. There is a stark difference between students’ level of interest in our football and basketball programs.”

“Our football team isn’t very exciting on the field. They play a boring brand of football. I like football, and I love the Aztecs, but I’d rather watch on TV.”