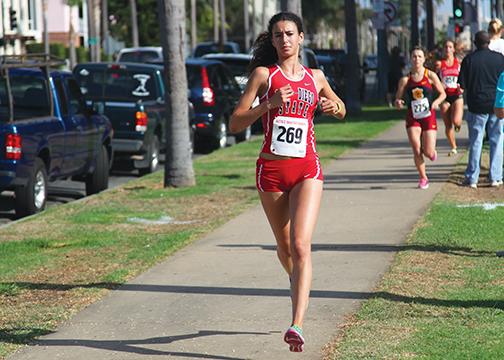 On Friday, Nov. 13, San Diego State cross country will look to put the Mountain West Championships behind it when it competes in the NCAA West regionals.

After a successful season that began with three wins in five races, the team was fairly disappointed when it finished ninth at the conference championships.

Assistant coach Karoly Varga said the team had hoped to place within the top six, but the high elevation affected the team in a negative way. The team was preparing to run in Reno, Nevada, at the elevation of 4,500 feet. However, the meet was held at the Montreux Golf Course at 5,700-feet elevation.

“We really wanted to do well in conference, but we come from the disadvantage of being at sea level all year long,” junior Elaine Ribeiro, the team’s top runner, said. “We don’t train the way (the other teams) train. Our bodies aren’t the way theirs are, so we have a harder time.”

In fact, the high elevation prevented Ribeiro from finishing the race

“(Ribeiro) ran out of oxygen,” Varga said. “She ran as hard as she could, but unfortunately she wasn’t prepared for the high elevation.”

Varga said Ribeiro collapsed and was rushed to the hospital where she was taken care of by the medical staff because she couldn’t breathe.

Sophomore Cassidy Towner, the team’s top runner at the MW Championships, said Ribeiro was only one of several runners who succumbed to the altitude.

“There was probably about 10 or 15 girls in the whole race that didn’t finish — she wasn’t the only one,” Towner said.

There is no way the team could have prepared for the altitude unless it had stayed and practiced there for about three weeks, Varga said.

However, even runners who are from the area had a hard time in the race.

“When you go that high there is not much oxygen and it’s hard to run like that,” Varga said.

Varga said the team would have placed within the top six had it not been for the elevation.

Ribeiro said the team is much better than what its conference championship performance indicates.

“Conference is not the best race to show how good we are because of the conditions, but we’re definitely stronger than that,” Ribeiro said.

Despite the team’s disappointment, SDSU actually competed better than its last-place ranking suggested.

The Aztecs are now ready to move on to regionals, where they don’t have to worry about the altitude as much, because it will be held in Seattle, Washington.

“The girls are very excited and they really want to prove they are in better shape than what conference (championships) showed,” Varga said.

Towner said the team is ready for regionals because the success it has had throughout the season has prepared them for this moment.

The races will begin at 12 p.m. Friday at the Jefferson Park Golf Course in Seattle.