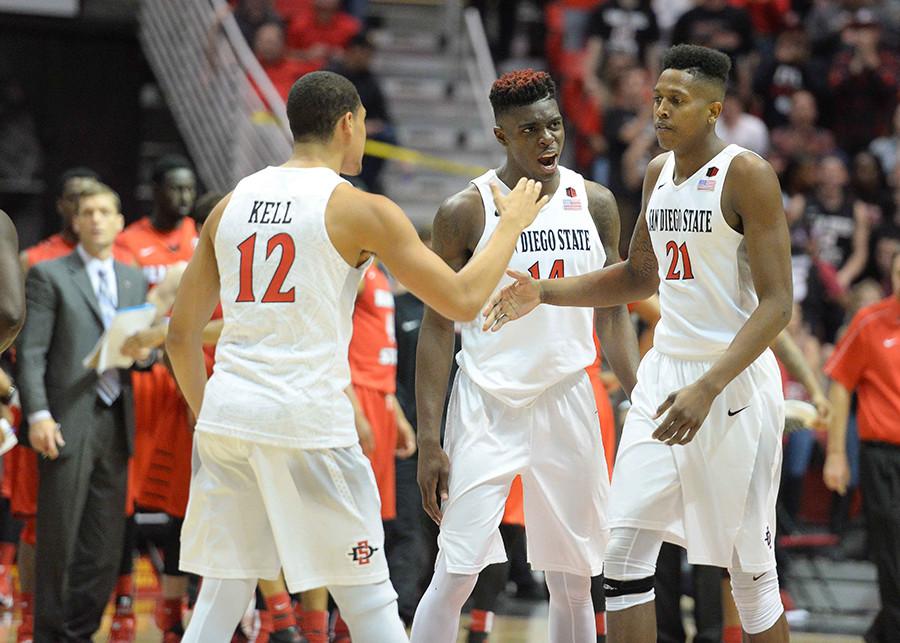 That’s how long it took for the whistle-savvy officiating crew to call a foul on Monday night.

The foul was on San Diego State men’s basketball senior center Skylar Spencer, who was doing as any good post player would do: not back down against University of Utah sophomore big man Jakob Poeltl.

In perhaps SDSU fans’ first glimpse of what’s to come this season, the Aztecs found themselves in foul trouble, limiting their bench down the stretch when they needed it most in a 81-76 road loss against the No. 16-ranked Utes.

“We’ve got to come together as a cohesive unit. Once we do that, we’ll be a problem,” he said. “Everybody has to get on the same page. If a guy goes to double (team) and one guy doesn’t see it, then that’s how we might give up a three. If I stunt and lose my man, (Jordan) Loveridge gets a 3.”

There weren’t quite as many fouls as against Illinois State (52), but the 47 total fouls (28 on SDSU, 19 on Utah) is another alarming look at how referees are calling more fouls in an attempt to increase scoring.

The introduction of redshirt-freshman forward Zylan Cheatham changed the game for the Aztecs, as he hustled on both sides of the ball.

He drove at Poeltl once, and went right by him for a bucket, but had to sit a lengthy part of the first half after getting two quick fouls. He came back in and picked up his third foul guarding — guess who — Poeltl.

Cheatham has been described as playing too fast. He has so much excitement and energy built up after spending all of last season on the bench that his next step will be how to control his energy.

He entered in the second half and promptly picked up two fouls. Despite that he had four points and seven rebounds in just eight minutes.

Spencer picked up two fouls as did fellow senior center Angelo Chol. Shepard and sophomore forward Malik Pope had two fouls in the first half despite the Aztecs consciously double-teaming Poeltl in the post.

Nevertheless, SDSU will look back on its missed opportunities as it moves forward.

“We feel like we have great talent on our roster, but we’re still working it out,” Shepard said.

Where Cheatham’s introduction was good for awhile and will turn into a weapon off the bench later in the year, sophomore guard Dakarai Allen’s was pivotal on Monday.

Allen went 4-for-4 in the first half with 11 points, including a remarkable 3-for-3 burst from beyond the arc that gave SDSU a 30-24 lead and silenced the Jon Hunstman Center. He finished with 15, one short of his career-high 16 that he scored last Friday night.

Momentum, as has been written about many times, has no loyalty.

Utah finished the first half with a blistering 14-2 run, going four for its last five from the field, culminating with senior guard Brandon Taylor’s buzzer-beater 3-pointer to give the Utes a 38-32 lead going into the break.

“We took way too many hard shots in the first half and we paid the piper,” head coach Steve Fisher said.

Taylor came right out in the second half after an SDSU turnover and sunk a 3. For awhile, the officiating was out of the spotlight until Shepard was called for a dubious offensive foul on Taylor, who was never quite set with his feet.

It wasn’t the only dubious call. The officials missed a 10-second violation with under 30 seconds left in the game that would’ve given SDSU the ball down two points.

The 10-second rule changed this year, where now it doesn’t matter if the ball is in the air after 10 seconds: it’s still a violation.

“It should’ve been a 10-second call in my opinion,” Fisher said.

Before the game, Shepard told Cheatham that he was “feelin’ it.” It took until the second half when Shepard scored 12 points in the first six-and-a-half minutes (19 total with seven rebounds) and forced Utah to call timeout.

A series of lead changes followed before Poeltl’s pass from a double team found found Lorenzo Bonam for a corner 3 and a 59-56 lead.

Then Brekkott Chapman hit a 3 for a 5-point lead followed by Taylor hitting another shot and forcing an Aztecs timeout trailing 66-59.

What could’ve been an exciting game with a thrilling, down-to-the-wire finish was instead decided at the free-throw line, although the Aztecs made it interesting down the stretch with Shepard nailing shots, but the Utes made 20 of their 22 free throws in the second half.

The stats won’t back up the final score. SDSU outshot Utah from the field, beyond the arc and the free-throw line. The Aztecs and Utes were dead even in rebounds (38) and nearly even in offensive rebounds.

Sophomore guard Trey Kell finished with 15 points on 5-for-15 shooting and seven rebounds. Pope had another slow game, going 1-for-8 with four points.