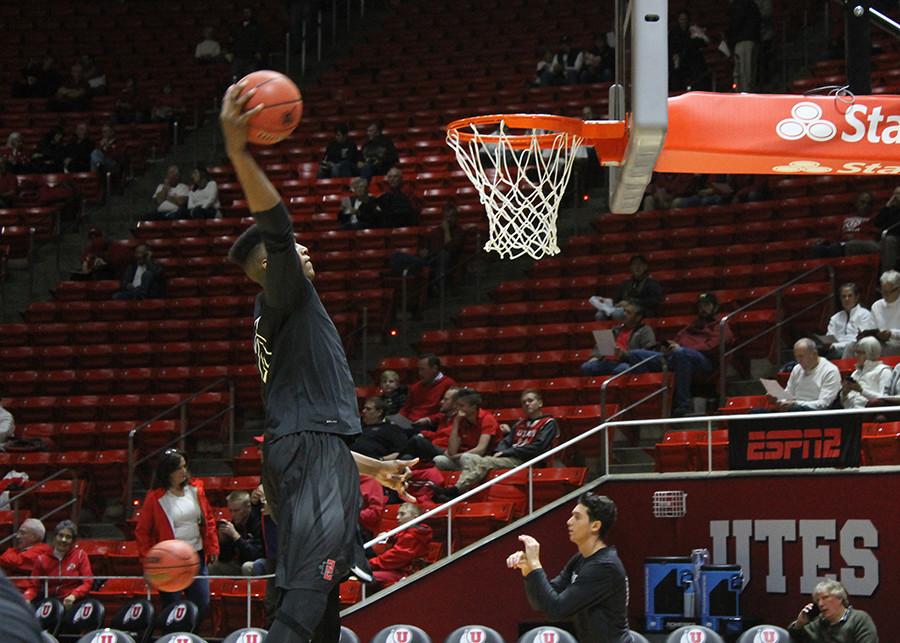 SALT LAKE CITY — Head coach Steve Fisher and senior forward Winston Shepard both acknowledged that San Diego State lost to a “very good” University of Utah team. The Utes might not have Delon Wright, but look to be a more complete team this year, especially with sophomore center Jakob Poeltl and junior forward Jordan Loveridge playing at the level they’re at.

If this game can be used as a barometer this early on, it might say the Aztecs are better than the 1-1 record they possess. They ran toe-to-toe with a Sweet 16 team that might be even better than it was last year.

They’ve scored 71 and 76 points in their two games — OK there’s a lot of free throws caused from the ridiculous amount of fouls the referees have been calling (52 against Illinois State, 47 against the Utes), but SDSU isn’t shooting them very well (65.5 percent). Just think if the Aztecs were shooting even better than that.

Junior guard Dakarai Allen has shown he’s a dependable weapon off the bench in light of sophomore forward Malik Pope’s struggles. Allen is the team’s leading scorer at 15.5 points per game while Pope, for some reason or reasons, is 1-for-12 from the field this season.

Granted, it’s only two games into the season. It’s just getting started.

Trending in opposite directions

Last year after the second game, an SDSU win over a ranked Utah team, it looked like the springboard the Aztecs needed to vault into the top 10 and set them up for a great season. As it turns out, SDSU could never really get it going last year. Five games later and the Aztecs went up against a ranked University of Arizona in Maui and nearly won, but didn’t.

Meanwhile the Utes went up and up and up after the 53-49 loss at Viejas Arena last year. Their season ended in a Sweet 16 loss to eventual-champion Duke University, who had throttled SDSU in the round of 32. That was largely fueled by a breakout season from Wright, Poeltl and Loveridge.

It was sort of expected that the Aztecs were going to double-team Poeltl in the post. From there, it was only a matter of Poeltl finding wide-open players for 3-pointers, which he did time and again, and which Utah sunk time and again.

Fortunately for SDSU, the Aztecs won’t go up against many big men this year who would warrant a double-team unless University of Kansas freshman forward Cheick Diallo becomes eligible before the two teams meet, or unless senior forward Perry Ellis has a monstrous year, which he has potential to do.

But the fact is this: SDSU’s weak-side defense was virtually non-existent against Utah. The only reason the Utes didn’t throw it into the post to Poeltl more to draw a double-team more often was because senior guard Brandon Taylor was toying with Aztec defenders at the top of the key and draining shots in the second half.

It’ll be something to keep an eye on, especially if SDSU goes up against an influential big man who warrants a double-team.

The impact of Zylan Cheatham

Although he fouled out, redshirt-freshman forward Zylan Cheatham showed glimpses of his potential. In eight minutes, he scored four points and seven rebounds. One of his two buckets was a blitzing drive in the lane right past Poeltl after SDSU ran enough ball-screens at the top of the key to where Cheatham found himself with the overwhelming speed advantage.

It’s a glimpse of what might be the Aztecs’ secret weapon off the bench: a guy who can come in, bring energy (he has a lot of it) and rebound so ferociously that people have said his name and “Kawhi” in the same sentence.

After the Utah loss, Fisher and Shepard both stressed the need to get better on the rebounding edge. Fisher was stressing it in the middle of the game.

“You gotta rebound, Z!” he said before the Utes shot a free throw.

Cheatham did, and in the process, jumped so high that his shoulders were above the rim, which is usually what happens when he rebounds. The next step for him now is learning to control his boundless energy. He’s hard-working and passionate, there’s no doubt about that, but against Utah, some of his fouls were ill-timed.

Overheard in the postgame

Even some Utes fans realize the potential of the Aztecs. A group of about five fans were standing around after the game midway down the lower bowl of the Hunstman Center.

“They should be ranked,” one said.

“Absolutely, give ‘em a few games and they’ll be just fine,” another person responded.

The Aztecs return to the hardwood Wednesday against San Diego Christian College, an NAIA Division I school. If there was ever an opportunity to get a jolt of confidence after a tough loss, this is it. SDSU has dominated SDCC in years past, beating the Hawks by 22, 52 and 34 points in the last three annual meetings.

Tip-off is scheduled for 7 p.m. and the game will air on Fox Sports San Diego.