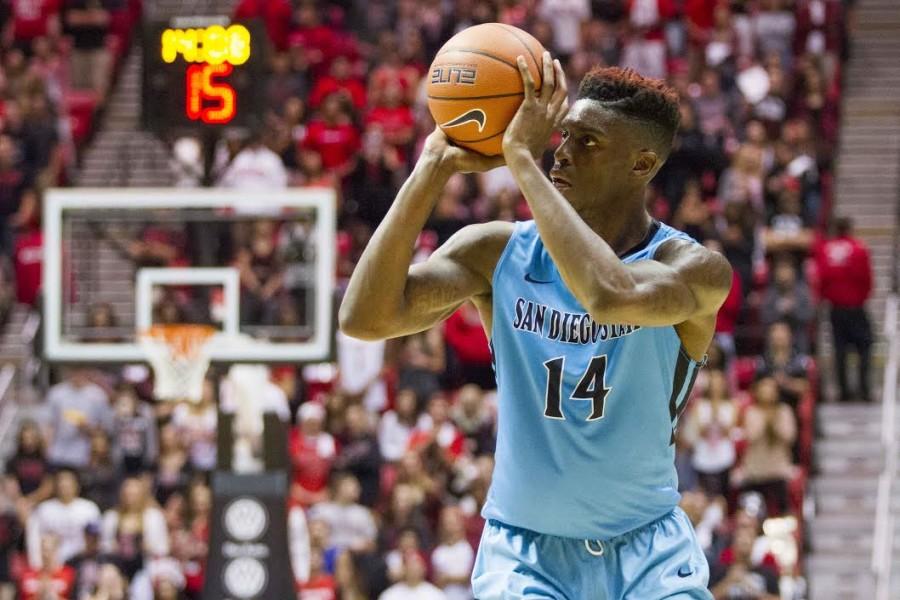 The crowd at Viejas Arena, as it usually does, got loud for a sustained period of time. Even the 8,000 or so people remaining late in the second half of Wednesday night’s men’s basketball game between San Diego State and San Diego Christian College were making their voices heard.

During a timeout…in which they had to cheer to lead a blindfolded fan to find a banner on the floor.

It was that kind of uneventful game as SDSU beat SDC 71-61 while playing in first gear.

“Had we quit at halftime I’d have felt that we made progress, but we had to play a second half and we did and (SDC is) leaving here feeling really good about themselves,” head coach Steve Fisher said.

SDC and its small lineup (one player at 6-foot-8) crashed the offensive glass against SDSU’s long roster (the Aztecs suited up four players taller than 6-foot-8). The Hawks had 14 offensive rebounds, SDSU had 12.

SDC senior forward Trevor English made things somewhat entertaining in the second half when he caught fire from 3-point range. He finished with 21 points on 6-of-10 from 3-point land. But other than English’s streak from beyond, the entirety of the game was played in a lull.

Unlike the previous two games in which the foul count alone could’ve paid a CEO’s salary, this game was quiet on the whistle front, too.

It took two minutes and 37 seconds for the referees to blow their whistle, unlike Monday against University of Utah when it took 19 seconds.

Nevertheless, redshirt-freshman forward Zylan Cheatham turned the page from Monday, when he fouled out after just eight minutes with a performance (13 points, eight rebounds in 26 minutes) that again teased his potential to be an impact player. He also had no personal fouls until 16:42 left in the second half.

Then another learning moment presented itself, this one in the form of a technical foul from hanging on the rim after a thunderous two-hand slam dunk.

Fisher brought Cheatham aside and spoke to him on the court, probably handing down sagely advice he’d learned from his mentor Bill Frieder, some nugget of basketball coaching wisdom…

Freshman point guard Jeremy Hemsley struggled in his second test as a college player, but he rebounded Wednesday with a solid performance against SDC, even though the offense didn’t run through him most of the time. He had 14 points, but more importantly no turnovers.

There was more off-ball movement and the offense was more active than usual, but it wasn’t decisive. It seemed like the Aztecs at times weren’t sure who they wanted to score on any given possession.

That’s where they missed senior forward Winston Shepard the most.

Shepard was held out as a precaution with a right ankle injury that Fisher thinks happened Monday when Shepard was called for an offensive foul against Utah.

“You miss guys that like to be the vocal guy in the locker room off and on the court,” head coach Steve Fisher said.

“I will for sure say leadership,” Pope said of what the team missed most with Shepard sidelined. “Winston usually initiates everything and has control with his experience.”

Sophomore guard Trey Kell didn’t play the second half with right knee soreness. Like Shepard, he was held out for precautionary reasons.

Cheatham fell awkwardly late in the first half after a baseline drive bucket, but came back in after rolling out his left thigh.

But it was a lackluster affair; SDSU went 3-for-11 from 3-point range in the first half and ended the first half with turnovers on four straight possessions.

The Aztecs ended 5-of-18 from the beyond the arc after Pope made two 3-pointers on back-to-back possessions in the second half. But he was slow going in the first half. Early in the game, he attempted two wide-open 3-pointers that clanked off the rim.

That was followed by an ugly air-ball runner in the lane as the shot clock ticked down to two.

The running game, which has largely been absent the first two games was…still absent. The Aztecs didn’t get many fastbreak points (six) like many people had expected they would this season, and the turnovers they forced didn’t lead to anything productive.

Fisher said that was a good thing, though, especially with Cheatham.

“At times when he just slowed down and didn’t try to go too fast, it was hard for somebody on the other side to stay in front of him,” he said. “When he just got it and went with it, he would run into a guy or try to do something too quickly.”

As always, the defense was suffocating the Hawks to the point of 34.9 percent shooting from the floor, which was inflated from English’s hot streak in the second half.

Junior guard Dakarai Allen got “kneed in the thigh” and was slow in the game, finishing 1-for-10 from the floor.

His counterpart, junior guard D’Erryl Williams, had a career-high in points for the second straight game. He had nine.