Inconsistent guard play an early theme for the Aztecs 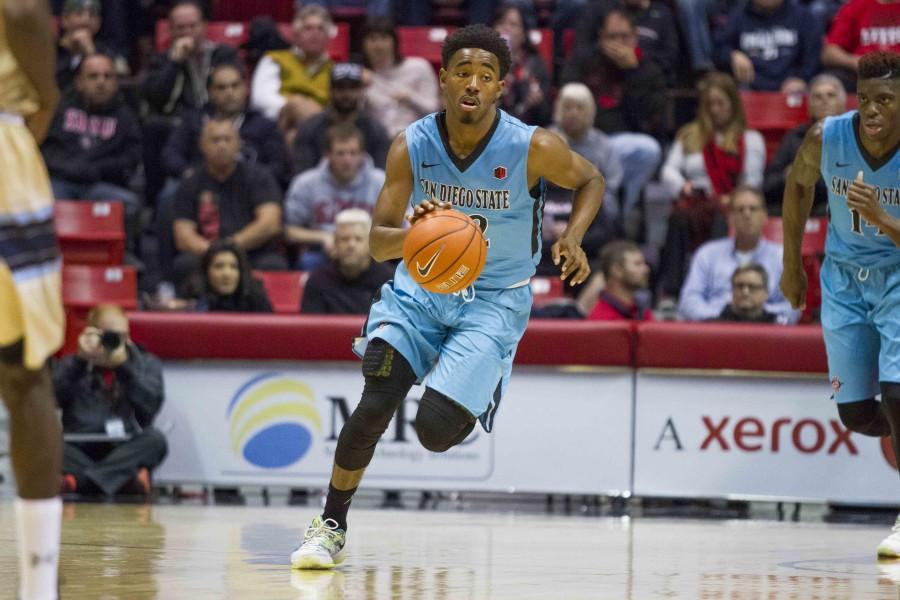 It’s too early to project whether the San Diego State men’s basketball team will make a seventh straight NCAA tournament, and it’s far too early to know if the Aztecs will flop. But three games into the season, it’s not too early to start looking for themes.

To date the Aztecs are 2-1 after winning their last game 71-61 over NAIA opponent San Diego Christian College.  But really the focus should be on the Aztecs’ 1-1 record against Division I teams.

In the first game of the season the Aztecs beat Illinois State, head coach Steve Fisher’s alma mater, 71-60. Despite winning by 11, Illinois State was within four points with 6:18 remaining in the game.

Most alarming, SDSU turned the ball over 18 times. Chalk it up to first-game nerves, or chalk it up to playing too free — a euphemism for being out of control. At this point, it’s not clear.

The second game, which was played at 4,830 feet elevation in the Jon M. Huntsman Center against No. 14 University of Utah, was the Aztecs’ first major challenge.

In the closing seconds of the game, SDSU was within two points of the Utes, but ultimately Utah won 81-76.

The last time SDSU led the game was with 10:59 left in the second half when redshirt-freshman forward Zylan Cheatham grabbed an offensive rebound and scored on a put-back.

Twenty-eight seconds later, the lead evaporated. And a little over a minute later, Cheatham was sent to the the bench with his fifth foul after only playing eight minutes.

Fouls have been a common theme for the Aztecs’ hard-nosed defense. Fifty-one total fouls were called against SDSU in the first two games.

Against Utah, the Aztecs were once again snake-bitten by their aggressiveness. Cheatham fouled out after eight minutes and senior center Skylar Spencer also fouled out late in the game

When sophomore guard Trey Kell fouled out against Illinois State, it further depleted a thin area for SDSU.

Coming into this season, the guard position was a question mark, and when redshirt-junior wing Matt Shrigley went down with a torn ACL in his left knee the question mark grew.

Hemsley had 20 points and five assists against Illinois State, but only scored seven points and had three turnovers against a better Utah team.

“I didn’t like the way I played at Utah, that game kind of bothered me,” Hemsley said. “I know I can do a lot better.”

Allen was borderline unconscious with 16 points and three impressive blocks against Illinois State, and had 15 more points on 3-for-4 shooting from 3-point range against Utah.

Against SDC, Hemsley scored 14 points, but Allen only accounted for four points on one basket and two free throws.

Kell started at the 2-guard position both games. In his first game he turned the ball over three times, scored two points and had one rebound.

Kell’s 15 points and seven rebounds against Utah looked good on paper, but that needs to viewed in the context that he shot the ball six more times than anyone else and and was only 5-for-15 from the field.

Given the questions surrounding the position coming into the season, let’s just say it’s a win that not all three of the Aztecs’ main guards have played poorly on the same night.

Sophomore forward Malik Pope has drawn the most criticism after going 1-for-12 from the field while playing 48 minutes in his first two games.

Senior forward Winston Shepard, who had 19 points and seven rebounds against Utah, said Pope will be fine.

Against SDC, Pope figured it out. He started the game shooting 1-for-4, but appeared to rectify his play by finishing the night with 14 points and shooting 50 percent from the floor.

While the offense looks like it has started to work itself out, for periods of time the defense has been concerning.

Utah hit 10 3-pointers against SDSU, and Wednesday night SDC hit eight 3-pointers in the second half.

Fisher took the blame for the Aztecs’ play against SDC.

“We wanted to play man-to-man, we wanted a full-court (press),” Fisher said. “We’ve got three guys that are playing at the same time, and maybe we shouldn’t have three of them at the same time out there if we’re going to full-court press that way.”

These three games could be sliced any which way. There is plenty of positive to go with the negative. At the end of the day, the season is three games old and the Aztecs are just getting started.