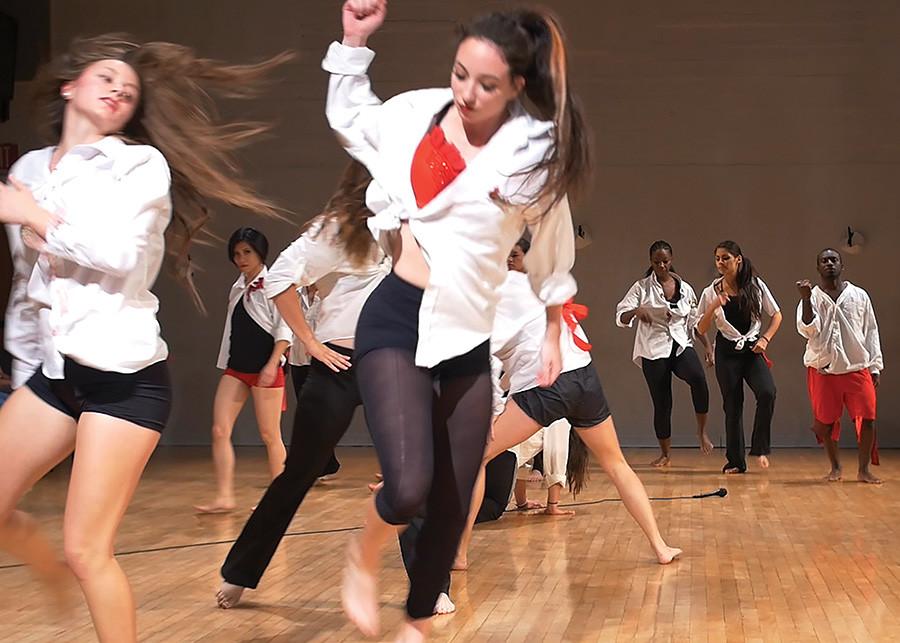 San Diego State’s University Dance Company is collaborating with the School of Theatre, Television and Film and the School of Art and Design for the first time in this winter’s production of “Doctor Faustus Lights the Lights.”

The production of the famous Gertrude Stein play brings together elements of dance, music, film, art, and theater.

The collaboration is also in conjunction with SDSU Common Experience and its 2015 theme of energy.

Typically, each of the four choreographers within the University Dance Company forms his or her cast from auditions held early in the fall, and then practice all year long for a concert in the spring.

“There’s a section in the piece that we call ‘Slow Fall,’” choreographer Jessica Humphrey said. “It’s dark and (the dancers’) faces are lit only by their phones. They take seven minutes to go from standing to lying down. You really have to slow down with every cell of your body.”

The University Dance Company is a class required for all dance majors. The final concert in the spring is the product of the class, but Humphrey said the dancers are graded on the quality of attention.

In the sense of an academic discipline, Humphrey described dance to be embodied knowledge. The piece for “Doctor Faustus Lights the Lights” is an example of the value system the company prioritizes.

“A big part of what we’re doing with dance here is being in the world, making structures around listening, paying attention and responding in real time to one another as human beings,” Humphrey said. “And we’re taking those structures and putting them on stage.”

Dance senior Aubrehe Yruretagoyena explained embodiment as the relationship between the mind and the body, rather than a separation of the two.

“The two create a whole,” Yruretagoyena said. “Embodiment is inside-out versus outside-in, and we activate it through awareness by simply, or not so simply, paying attention to what is within.”

One exercise in Humphrey’s class preparation for the production was a literal and physical translation of words from the text into dance choreography.

“You get to see what people’s relationships are with words and to see how much that can vary,” Humphrey said.

Yruretagoyena strives for a constantly evolving relationship with her body instead of being a tyrant of her body.

“I am happily reminded over and over in our dance program here at SDSU that we as humans, when working together, combine to create a greater sum of our parts,” she said.

“When I apply the concept of synergy to my body and mind, I become greater than the sum of my parts and thus have a greater availability for expression, interaction and presence.”