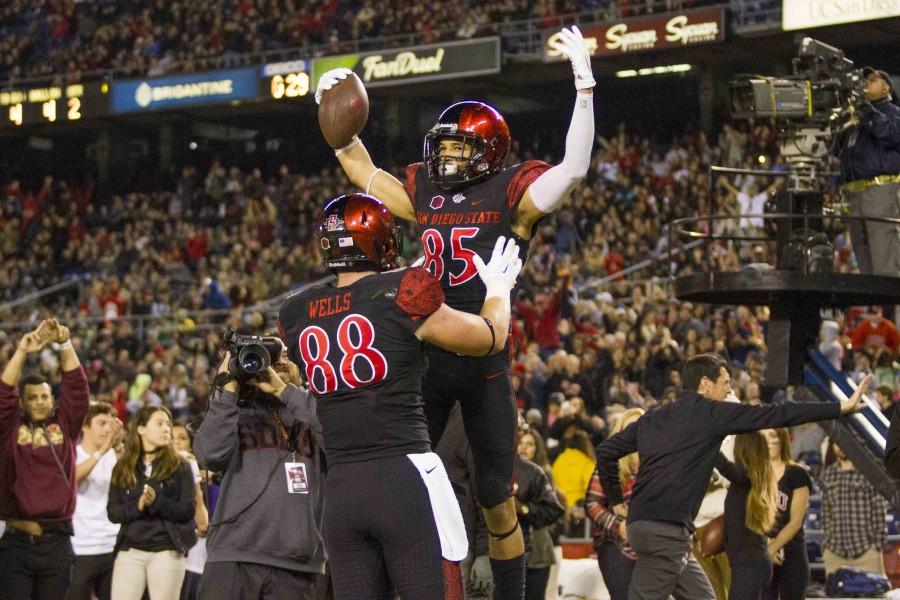 LAS VEGAS — UNLV’s mascot is dubbed the Runnin’ Rebel, but it’s been San Diego State that has stormed into opposing Mountain West cities like a bandit this season, blowing out opponents on their home turf.

The Rebels were held to a mere jog Saturday night in Las Vegas as the Aztecs cruised to a 52-14 victory, just a few hours after learning they had won the West Division of the MW.

“It was nice coming over here as a coach knowing that we were already the West division champs and we were going to get to play in a championship game,” head coach Rocky Long said. “But I had no concerns we weren’t going to play well because I believe Monday through Friday is when your team gets ready to play.”

SDSU (8-3, 7-0 MW) will play Air Force Academy on Dec. 5 for the Mountain West Championship. The site of the game will be determined by a composite ranking system if neither team cracks the College Football Playoff Top 25.

“A lot of the guys who were apart of the 2012 team, they shared the conference championship. Now we have the chance to win it by ourselves,” junior running back Donnel Pumphrey said.

The Aztecs won every regular-season road conference game this season by at least 14  points and the 52 points marked a season-high for the team.

On a landmark day for the program, Long’s defense put together one of its signature performances, holding UNLV scoreless through its first six possessions and forcing three turnovers in that span.

The Aztecs turned two of the turnovers into touchdowns, helping them jump out to a 31-0 lead at halftime.

“Once we make one big play our team gets so excited, especially the defense,” junior linebacker Randy Ricks said.

It took the SDSU defense 37 minutes and 46 seconds to concede its first points on defense via a 14-yard touchdown pass from sophomore quarterback Kurt Palandech to sophomore wide receiver Kendal Keys.

Junior defensive back Na’im McGee was disqualified from the game on the play for targeting, as he hit Keys above the shoulder on his way into the end zone.

It was the first touchdown scored on the Aztecs’ defense in 107 minutes and 37 seconds, dating back to when the team played Colorado State on Oct. 31.

Ricks, returning from a foot injury, started the party with a sack and forced fumble on ULNV’s second possession which was scooped up by senior defensive lineman Jon Sanchez.

Pumphrey then turned that into a 2-yard touchdown, putting the Aztecs up 14-0 while tailgaters were still filing into their seats.

It was just another day at the office for Pumphrey, who racked up 139 yards and two touchdowns on 14 carries without touching the ball the entire fourth quarter.

His seven straight games rushing for at least 100 yards is the second-longest active streak in the Football Bowl Subdivision.

“We all work hard and I see these guys working in practice and we all deserve (to score),” Pumphrey said.

By game’s end, the defense had tallied four turnovers, seven sacks and 12 tackles for a loss.

The team has come a long way since losing to University of South Alabama on Sept. 19, and Long was able to break down the success into two categories.

“Obviously, the players are executing much, much better than they did before,” Long said. “Second, they’re playing with a lot more confidence than they did early in the season. It shows on the field.”

SDSU comes home for it’s regular-season finale next Saturday against University of Nevada. There is still a lot on the line for the Aztecs in that game.

“How we play next week and how Air Force plays next week will have a lot to do with who hosts the (championship game),” Long said. “So that makes the (Nevada) game important for them and important for us.”