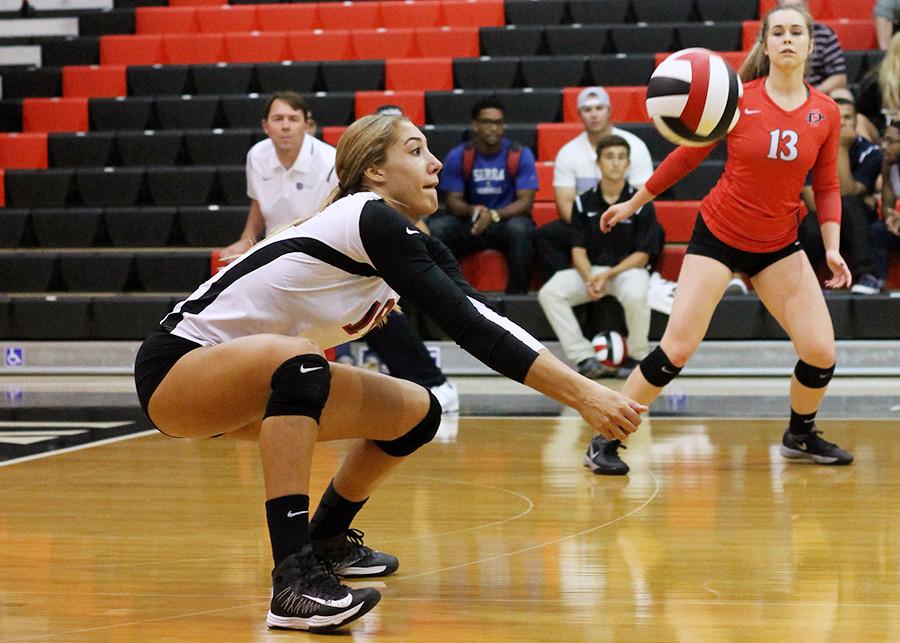 Continuing its strong November presence, the San Diego State volleyball team defeated San Jose State Saturday afternoon in three sets (25-21, 25-22, 25-23). The Aztecs have won four of their five matches so far this month and improved to 11-19 overall and 8-9 in the Mountain West.

“I don’t think we would have been playing as well had we not figured out how to gel,” she said. “The chemistry is very good and they are understanding what it means to play like a team.”

SDSU had a difficult season, with 19 away games and only 12 home games, including preseason matches. This schedule was constructed intentionally in order to help the team improve on the road. The team even ended up winning more games on the road than at home. As the season progressed, it became clear the Aztecs had found their groove and were beginning to play with confidence.

“The team is still young, and I think with us finishing playing as well as we have, it’s encouraging to them,” Collins-Parker said. “It really is going to set the tone for who we are.”

Having the opportunity to develop a younger team this year will allow it to continue to grow together in future seasons.

With only one game left, Collins-Parker is proud of the team’s accomplishments and looks forward to working in the offseason.

“I think that we’ve continued to improve and that we’re playing our best volleyball,” she said. “Obviously we are trying to finish as high as we can. I think blocking is something we could really continue to improve on. We spend a lot of time individually, as well, so each player has things they’ll continue to get better at.”

The Aztecs will return home to face University of Nevada in their final match of the season on Tuesday. The team will also be recognizing its seniors and celebrating Senior Night.